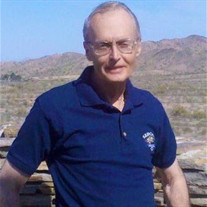 Keith Marvin Davis, 81, of Sun City, AZ, passed away in Sun City, AZ after a brief illness on February 13th, 2020. A Celebration Of Life will be held 11 a.m. Thursday, February 27, 2020 with a gathering from 10-11 a.m. at Gunderson Funeral Home and Cremation Services. Burial will take place at Murray Cemetery in Murray, IA. Keith was born September 14th, 1938 in Fort Dodge, Iowa the son of William (Bill) and Verval Davis. He attended school in Barnum, Iowa and graduated from Fort Dodge high school in 1957. Following his education Keith served in the US Army and was stationed in Fort Huachuca, AZ. He married Judith (Judy) Smith on March 1, 1969 at the Little Brown Church in Nashua, IA. They lived in rural Ft. Dodge where Keith farmed raising corn, beans and cattle. In addition to farming Keith was also a full-time employee at Electrolux in Webster City, IA. Keith was known as a hard worker that loved to be outdoors. He enjoyed hiking, wildlife, reading and working on cars. He preferred warm weather and several years after retirement purchased a home in Sun City, AZ where he spent the winters from 2009-2018. He moved to Arizona permanently in 2018 shortly after his 80th birthday. In the Arizona sun Keith enjoyed hiking at the White Tank Mountains, gardening, spending time with family and taking the occasional weekend trip to enjoy the scenery of Northern Arizona. Keith is survived by his children James Davis of Washington DC and Karen Davis of Scottsdale, Arizona. He is also survived by his sister-in-law and brother-in-law Jane and Jerry Schmitt of Hampton, Iowa, brother- in- law Michael Kilts of Eatonville Washington, nephews Duane Pearce of Portland, Oregon and Jeffrey Schmitt of Iowa Falls, Iowa, nieces Sue Pearce of Peoria, Arizona, Sonya Pearce of Youngtown, Arizona and Kim Pearce Schuur of Ft. Dodge. He was preceded in death by his wife Judy, sister and brother-in-law Colleen and Virgil Pearce, and his parents. In lieu of flowers, memorials may be gifted in Keith’s name to the White Tank Mountain Conservancy https://www.wtmconservancy.org/

The family of Keith Marvin Davis created this Life Tributes page to make it easy to share your memories.

Send flowers to the Davis family.