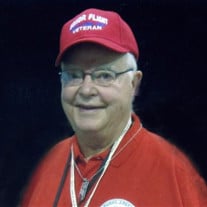 Kenneth (Smiley) Hanna, 88, of Fort Dodge formerly of Humboldt, died on Monday, August 12, 2019, at Friendship Haven in Fort Dodge. Mass of Christian Burial will be held at 10:30 AM on Saturday, August 17, 2019, at Corpus Christi Church in Fort Dodge. Burial will be in the Corpus Christi Cemetery in Fort Dodge with Full Military Honors conducted by the United States Navy and the VFW Post #1856. Visitation will be from 4:00 PM to 7:00 PM on Friday at the Gunderson Funeral Home and Cremation Services in Fort Dodge. A Vigil for the Deceased will be held at 7:00 PM on Friday at Gunderson’s. Ken is survived by his wife, Sharon; their three children, Randy (Laura) Hanna of Twin Lakes, Iowa, Shirley (Doug) Hottman of Avon, Indiana and Lynda (Rob) Lowery of Fort Dodge; six grandchildren, Jason (Megan) Hanna of Fort Dodge, Mindi (Jim) Knebel of Chicago, Amanda (Greg) Rees of Fort Dodge, Josh (Crystal) Lowery of Chicago, Trevon Lowery (Sam Witte) of Fort Dodge and Zach Lowery of Fort Dodge and five great grandchildren, Aubrey Rees, Mason Hanna, Teegan Rees, Max Hanna and Aileta Lowery. He is also survived by his sister, Harriett Bothne of Humboldt and a half-sister, Diane Essing Fort Dodge. Ken is preceded in death by his parents; a great-grandson, Benjamin Hanna; two brothers, Chub Hanna and Robert Hanna and two sisters, Lillian Johnson and Bernadine Scott. Kenneth (Smiley) Gene Hanna, the son of Leo and Lillian (Husske) Hanna) was born on April 19, 1931, in Humboldt, Iowa and he attended Humboldt Schools. Ken entered the military on November 30, 1950 and served in the United States Navy during the Korean War. He received his honorable discharge from the Navy on September 7, 1954. After his discharge, Ken returned to Humboldt and began working at Gus Glaser Meats. On September 12, 1955, Ken was united in marriage to Sharon Minion at St. Mary’s Church in Humboldt. Ken later started working for USG in the Maintenance Department, retiring in 1996. Ken enjoyed watching NASCAR, bowling and remodeling their house but his true love was spending time with his family. You can take a boy off the farm, but you can’t take the farm out of the boy. He was a member of the Teamsters & AFL-CIO, Holy Rosary Men’s Club and Holy Trinity Parish. In Lieu of Flowers, memorials may be left to the Brushy Creek Honor Flight or to the Journey of Hope.

Kenneth (Smiley) Hanna, 88, of Fort Dodge formerly of Humboldt, died on Monday, August 12, 2019, at Friendship Haven in Fort Dodge. Mass of Christian Burial will be held at 10:30 AM on Saturday, August 17, 2019, at Corpus Christi Church in Fort... View Obituary & Service Information

The family of Kenneth "Smiley" Hanna created this Life Tributes page to make it easy to share your memories.

Send flowers to the Hanna family.