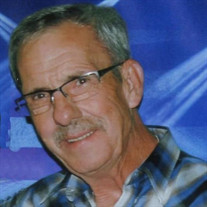 Kenny Ray Smith, 66, of Gowrie passed away on Friday, April 19, 2019 in the arms of his wife in Gowrie, IA. The funeral service will be held at 2:00 p.m. on Tuesday, April 23, 2019 at St. Olaf Lutheran Church. Visitation will be from 4:30pm to 8:00pm on Monday, April 22, 2019 at Gunderson Funeral Home and Cremation Service. Kenny Smith, the son of Katherine and Shelton Smith, was born on September 19, 1952 in Fort Dodge, IA. Kenny attended Lehigh Schools and graduated in 1972. He was a Rank E5 in the Army and fought during the Vietnam War. He trucked for 34 years as an owner/operator. At the time of his death he was employed by Ramthun Trucking. Love of his life, he married Sue on August 15, 2003. They lived in Fort Dodge and later moved to Gowrie. Kenny is survived by his wife, Sue Smith; sons, Jason (Lesley) Smith, Jerod (Shawna) Dencklau, and Justin Dencklau; daughter, Dina (Matt) Hawkins; grandchildren, Sydnie, Rylie, Ashlie, Taylor, Khloe, Brayden, Khyean, Carter, and Alyssa; brothers, Roger (Judy) Smith and Danny (Sue) Smith; sisters, Lenore (Bob) Page, and Marilyn (Jerry) McCubbin; and his mother-in-law, Sandi Schade. Kenny is preceded in death by his parents, Katherine and Shelton Smith; brothers, Jim and Sam; and his son, Justin. Kenny was a protector. He was caring and would help anyone. He loved his dogs, Daisy, Toby, and Snoopers. Kenny loved to dance with Sue and went whenever they could. Kenny was very proud of all his kids. He cared and worried about them always, even in his last few days. In lieu of flowers, please direct memorials to the discretion of the family.

The family of Kenny Ray Smith created this Life Tributes page to make it easy to share your memories.

Send flowers to the Smith family.