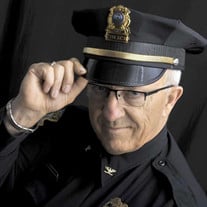 Kevin Doty, 66, formerly of Fort Dodge, died peacefully at his home in Ankeny on April 17, 2020 following a courageous battle with acute cancer. Kevin J. Doty, son of Shirley and Edna (Faber) Doty, was born December 26, 1953 in Algona, Iowa. He was a 1973 graduate of West Bend High School and 1975 graduate of the North Iowa Community College, where he obtained an Associates Degree in Criminal Justice. On August 23, 1975 Kevin was united in marriage to his high school sweetheart Daniela Brown. The couple made their home in Fort Dodge where Kevin served on the Fort Dodge Police Department until 1979, at which time he took a job as a Special Agent for the Illinois Central Railroad. Kevin returned to the Fort Dodge Police Department in 1993, where he remained until 2017, retiring as Chief. The couple moved to Ankeny in 2017 to be closer to their children and grandchildren. Kevin was very devoted to his family. He was an active member of Holy Trinity Church and later Saint Luke The Evangelist in Ankeny, IA. Kevin served on many charitable boards throughout his life and was most recently a member of the Knights of Columbus. He was an avid Hawkeye fan, spending many Saturdays at Kinnick Stadium with family and friends. Survivors include his wife Dani; his children Katherine (Ryan) Garrett, Ryan (Rachael) Doty; his grandchildren Ethan, Everly and Ella; his sisters Mary Catherine Greinert of Unionville, MO, Patricia (Kevin) Kennefick of Orano, MN, Diane (Kevin) Montag of West Bend, IA; mother-in-law Anna Zita Brown of West Bend; in-laws Nan (Curt) Klouse of Mason City, Faith Brown of Vinton, Larry (Renita) Brown of West Bend, and Renee (Tim) Dailey of Princeton, MO. He was preceded in death by his parents, father-in-law Rex Brown and his brother-in-law James Greinert. A private Mass of Christian Burial will be held 10:30 a.m. Wednesday, April 22, 2020 at Corpus Christi Church. For those who would like to join the funeral procession in show of support, please park and remain in vehicles at Corpus Christi Church at 11:00 a.m. Wednesday. Burial will be held in Corpus Christi Cemetery. In lieu of flowers, memorials and/or donations could be made out to the Leukemia & Lymphoma Society (LLS) - Pappa’s People sent to 1704 NW Ridgeline Court, Ankeny, IA 50023.

The family of Kevin Doty created this Life Tributes page to make it easy to share your memories.

Kevin Doty, 66, formerly of Fort Dodge, died peacefully at his...