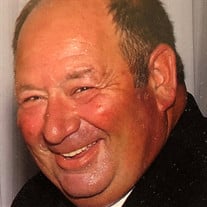 Larry Eugene Dencklau, resident of Vincent, Iowa, passed away on May 19, 2019. He was born October 6, 1946 in Fort Dodge, Iowa to Eugene Dencklau and Hazel (Nolte) Dencklau. He was a member of St. Paul’s Lutheran Church. He attended Vincent Country School through 8th grade and graduated from Eagle Grove High School. He was married to Linda Stanberg on August 12, 1967. Larry was a lifetime farmer and learned his trade as an electrician. He worked for Lingreen Electric, Tjaden Electric and Gross Electric for over 40 years. He dutifully served in the Iowa National Guard and Webster County Reserves. His hobbies included hunting, bowling, and race spectating. He will be forever known as a devoted husband, loving father, and caring grandfather. His strong faith in God was consistent throughout his whole life. Larry is survived by his sweetheart wife: Linda and his three children: Amy Stradtmann (Brad), Scott Dencklau (Mimi) and Katie Newman (Mike). He is also survived by his 8 grandchildren: Kaitlyn, Cole, Payton, Adam, Chase, Eli, Lincoln and Aly. He will also be missed by many family and dear friends. He was preceded into death by his parents. Visitation will be held at Gunderson’s Funeral Home, Wednesday May 29, 2019 from 5-8pm. Funeral services will be held at St. Paul’s Lutheran Church on Thursday, May 30, 2019 at 11 am. He will be laid to rest at Colfax Cemetery, Vincent. In lieu of flowers please make donations to St. Paul’s Lutheran School.

Larry Eugene Dencklau, resident of Vincent, Iowa, passed away on May 19, 2019. He was born October 6, 1946 in Fort Dodge, Iowa to Eugene Dencklau and Hazel (Nolte) Dencklau. He was a member of St. Paul&#8217;s Lutheran Church. He attended... View Obituary & Service Information

The family of Larry E. Dencklau created this Life Tributes page to make it easy to share your memories.

Send flowers to the Dencklau family.