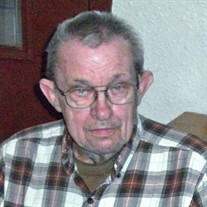 Laverne C. Butrum, 80, of Duncombe, Iowa passed away on Thursday, April 9, 2020 at MercyOne in Sioux City, Iowa. There will be a private service at a later date. Burial will be at Graceland Cemetery in Webster City, Iowa. Laverne was born November 16, 1939, in Brainerd, MN to Oscar and Hermina (Sohns) Butrum. They later moved to Webster City where he grew up. He still had the love for up north. Every year he made a few trips to Brainerd, MN, to visit his cousins and aunt. He enjoyed going fishing and hunting while up there. Laverne went to Webster City schools where he actually got the paddle of the year board. After school he moved to Milwaukee, Wisconsin for a few years. Then returning to Webster City where he did various types of jobs always lending a helping hand or a word or two. He ultimately enjoyed doing electrical work and running a punch press. There wasn’t very little work that he didn’t know how to do. Laverne worked for Modern Farms in Webster City for 18 years until he had an injury and the company moved. Laverne and his wife Gwendolyn (Chally) Butrum established their home in Duncombe for 39 yrs. He is survived by his wife Gwen Butrum; their three children, son Vern (Paula) Butrum of Webster City, IA daughters Karen Butrum, of Fort Dodge, IA and Cynthia (Cindy) Butrum of Duncombe, IA; two grandchildren Christina Butrum of Webster City, IA and Crystal Rashedi of Humboldt, IA, one grandson and one great granddaughter Alaina Butrum; sister Betty (Jerry) Showers of Madison, Alabama, brother Calvin (Patricia) Butrum of Webster City, IA, sister Helen (Carl) Trask of Rincon, Georgia; cousin Julie Borg of Brainerd, MN along with several nieces and nephews. Preceded in death by both parents Oscar and Hermina Butrum. Sons Terry Butrum and James Butrum. One great grandson; sister Evelyn Butrum in infancy and his twin sister Lorraine Smith. Laverne was always seen outside in the evenings doing projects or sitting in his chair in the garage watching traffic go by. He made many trips around town during the day. He was always up for a good visit with people. He enjoyed watching the eagles on the computer, while relaxing in his easy chair with his dog and cat. There weren’t many people that he considered a stranger to him.

Laverne C. Butrum, 80, of Duncombe, Iowa passed away on Thursday, April 9, 2020 at MercyOne in Sioux City, Iowa. There will be a private service at a later date. Burial will be at Graceland Cemetery in Webster City, Iowa. Laverne was born... View Obituary & Service Information

The family of Laverne Butrum created this Life Tributes page to make it easy to share your memories.

Laverne C. Butrum, 80, of Duncombe, Iowa passed away on Thursday,...

Send flowers to the Butrum family.