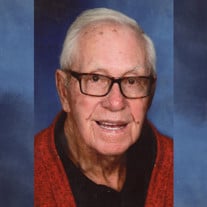 Lawrence Roseke, 88, of Fort Dodge, died March 9, 2019 at the Paula J. Baber Hospice Home. Memorial service will be held 10:30 a.m. Monday, March 18 at Good Shepherd Lutheran Church. Interment and military honors will be held in North Lawn Cemetery. Visitation will be held from 4:00 – 7:00 p.m. Sunday, March 17 at Gunderson Funeral Home & Cremation Services. Lawrence A. Roseke was born December 25, 1930 in Lake City, IA. He graduated from Gowrie High School and served in the U.S. Army from 1951-53. He built homes in Fort Dodge and worked construction. He was married to Corrine Schaght and she preceded him in death. Lawrence married Mae Tammen and the couple later divorced. On February 3, 1978 he was united in marriage to Delores Nieman. The couple lived 26 years in Bella Vista, AR. Lawrence confirmed his faith in God at an early age. He was a life-long member of the Lutheran Church and served on several boards with his church both here and in Arkansas. He was a Scout Master with the Boy Scouts of America, a member of the Gowrie Drum and Bugle Corp. and a member of the Home Builder’s Assoc. He enjoyed golf, fishing, dancing, playing cards and doing latch hook projects. Most of all he enjoyed time spent with his family. Survivors include his wife Delores of 41 years; his children Larry (Julia) Roseke of Huntsville, AL, Becky (Vince) Goodwin of Lakeville, MN, Heidi (Mike) Lindstrom of Burnsville, MN; his step-children Steve (Susan) Schuster of Ashburn, VA, Larry (April) Schuster of Fort Dodge, and Sue Schuster (Merle Bloom) of Twin Lakes; 14 grandchildren; 6 great grandchildren; and his brother-in-law Jerry Rowe. He was preceded in death by his parents, his first wife Corrine, his sisters Iris Hinton and Myra Christopher, and sister-in-law Marva Rowe.

The family of Lawrence Roseke created this Life Tributes page to make it easy to share your memories.

Send flowers to the Roseke family.