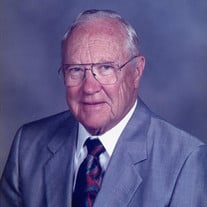 Lee Oester, 96, of Fort Dodge died on Saturday, August 8, 2020 at the Paula J. Baber Hospice Home. Service will be held 1:00 p.m. Friday, August 14, 2020 at St. Olaf Lutheran Church in Fort Dodge, IA. Interment will take place at North Lawn Cemetery in Fort Dodge, IA. Lee Oester, the son of Lloyd R. and Marie L. (Hansen) Oester was born on October 23, 1923 in Sheldon, IA. Lee spent nearly four years in active duty during World War II and was in the European Theater of operations. He completed his tour of duty as an Infantry Captain. He was a member of the 14th Armored Infantry Division Association. Lee joined the New York Life on June 1, 1946. He located in Rock Rapids, IA for a short time. Lee Oester was united in marriage to Anne Schaafsma on October 4, 1946 at Hospers, IA. Several months later Lee took his bride on a honeymoon trip to Fort Dodge. They were so impressed with the big city they relocated there. Lee was a member of St. Olaf Lutheran Church and served for several years on the church council. He was also active on fund drives for the YMCA, United Fund, Heart Fund and co-chairman for Cancer drives. Lee had a life membership in the Masons and the Fort Dodge Elk Lodge. Lee retired from New York Life after 55 years. Lee & Anne had wintered in the southwest for several years and resided in Mesa, Arizona seven months of the year. Lee lost the love of his life, Anne, on Saturday, September 17, 2016 after 69 happy years of marriage. Lee enjoyed gardening, fishing, traveling, and spending time with grandchildren and great-grandchildren. Lee is survived by his children, David Oester, Nancy (Phil) Bechen and Mark (Tammy) Oester, all of Fort Dodge; five grandchildren, and four great-grandchildren. Lee was preceded in death by his wife, Anne; his parents, Lloyd and Marie; his infant son, Steven; and his daughter-in-law, Linda. Memorials may be directed to the Paula J. Baber Hospice Home.

Send flowers to the Oester family.