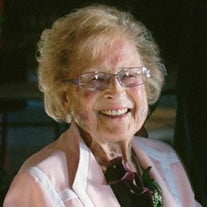 Lorraine A. Rhodes nee Jentz, Berkland passed away on June 6, 2021. She was 26 days shy of her 95th birthday. Lorraine was born in Fenton, Iowa to Fred and Martha (Kressin) Jentz. She and her sister Valerian and brother Jim grew up on a farm near Fenton. After graduating from Fenton High School, she was married to Donald Berkland in 1944. Their union was blessed by 2 children, Cheryl and Dennis. They parted ways and Lorraine attended Beauty School in Fort Dodge where she operated a successful beauty shop for several years. Lorraine married Dale Rhodes from Humboldt, IA, in 1972. After marrying Dale, she continued her beauty career and gained her Real Estate license. They lived on their acreage in Humboldt for several years. Dale and Lorraine became “snowbirds” and spent several years wintering in Apache Junction, AZ before settling in Fort Dodge after Dale’s health deteriorated. Dale passed away in 2008 after 35 years of marriage. They enjoyed dancing and listening to music together. Lorraine was known for her love of family, her smile, and infectious laugh, as well as her love of baking. There wasn’t a sweet dessert that couldn’t entice her. Among her varied interests, Lorraine and her friends met often to quilt, play cards and dominoes, and eat pizza. In 2016, Lorraine moved to Lakeville and then Prior Lake, Minnesota. Lorraine will be missed by her children Cheryl (Dennis) Uthof, Dennis (Vickie) Berkland, stepdaughter Terri (Jim) Hofer. Grandchildren include: Kara Berkland, Stephanie Berkland, Marcie (Josh) Schwartz, Tiffany (Greg) Mercuri and Aaron (Mindy) Hofer. Great grandchildren Erin and Michael Mercuri, and Hunter Magnuson. As well as sister-in-law Tina Jentz, she will also be remembered by many nieces and nephews. She was preceded in death by her parents Fred and Martha Jentz, sister and brother in law Valerian and Eldon Hurlburt, brother Jim Jentz, husband Dale Rhodes, grandson Jeremy Berkland, and many family and friends. In lieu of flowers donations can be made in Lorraine’s name to the University of MN Microbiota Therapeutics Fund (1-800-775-2187). Funeral services will be held at Good Shepherd Lutheran church in Fort Dodge, IA on Saturday, June 12th at 11 AM.

Lorraine A. Rhodes nee Jentz, Berkland passed away on June 6, 2021. She was 26 days shy of her 95th birthday. Lorraine was born in Fenton, Iowa to Fred and Martha (Kressin) Jentz. She and her sister Valerian and brother Jim grew up on a farm... View Obituary & Service Information

The family of Lorraine A Rhodes created this Life Tributes page to make it easy to share your memories.

Lorraine A. Rhodes nee Jentz, Berkland passed away on June 6,...

Send flowers to the Rhodes family.