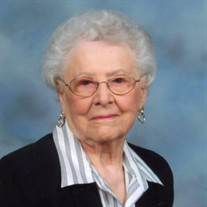 Mae Olivia Phillips, age 100, passed away of natural causes on Wednesday, April 15, 2020 at Trinity Regional Medical Center in Fort Dodge, Iowa after being admitted the previous evening. Mae has been a lifelong resident of Fort Dodge and resided the last four years at Bickford Cottages in Fort Dodge. A private family graveside devotion will be held at a later date. Arrangements have been entrusted to Gunderson Funeral Home and Cremation Services. Mae was born January 6, 1920 on a farm near Boxholm, Iowa to Arthur and Mabel Dominic. She had two brothers, Jack and Frank, both of whom preceded her in death. She graduated from Boxholm High School in 1937 and then attended Fort Dodge Beauty Academy obtaining a beautician’s license. She returned to Boxholm opening and successfully operating a beauty salon. Mae met Joseph Seko prior to WWII while operating her beauty salon. They were married on June 21, 1947 after Joseph returned from serving in the Army during WWII. They moved to Fort Dodge where they made their home and were blessed with two sons, James and Stephan. Joseph passed away in November 1969. In September 1973 Mae and Paul Phillips of Eagle Grove, Iowa were married. Paul passed away in December 2000. Mae enjoyed working at the House of William dress shop for 27 years as a seamstress. In addition to her skills as a beautician and seamstress, Mae and her spouses enjoyed dancing and socializing with their many friends at the Fort Dodge Dance Club. Mae was an excellent cook that she learned from her mother while growing up on the farm. Mae was a member of The Catholic Daughters and Lioness Club. She was preceded in death by her parents, two spouses, and two siblings. Mae leaves a family who loved her, and she had many wonderful friends. Mae will be dearly missed by sons James (Diane) Seko of Lincoln, NE and Stephan (Karen) Seko of Downers Grove, IL. Mae will be missed by step sons Craig (Pam) Phillips of Pocahontas, IA and Kevin Philips (recently deceased) and wife Mary of Eagle Grove, IA. The five grandchildren include Felicia (Greg) MacDonald of Lincoln, NE; Gregory (Crystal) Seko of Ankeny, IA; Jeffrey (Elizabeth) Seko of Plainfield, IL; Joshua (Jenna) Phillips of Pocahontas, IA; Jacob (Mahala) Phillips of Mason City, IA. There are eight great grandchildren.

Mae Olivia Phillips, age 100, passed away of natural causes on Wednesday, April 15, 2020 at Trinity Regional Medical Center in Fort Dodge, Iowa after being admitted the previous evening. Mae has been a lifelong resident of Fort Dodge and resided... View Obituary & Service Information

The family of Mae O Phillips created this Life Tributes page to make it easy to share your memories.

Mae Olivia Phillips, age 100, passed away of natural causes on...

Send flowers to the Phillips family.