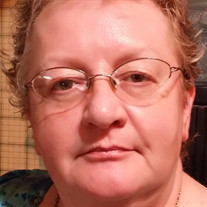 Margaret E. Lewis, 67, of Fort Dodge, passed away on Tuesday, November 9, 2021, at UnityPoint Trinity Regional Medical Center in Fort Dodge. Services will be 10:00 AM on Saturday, November 13, 2021, at the Gunderson Funeral Chapel in Fort Dodge. Visitation will be from 4:00 PM to 6:00 PM on Friday, November 12th at the Gunderson Funeral Home and Cremation Services in Fort Dodge. Margaret Elizabeth (Gow) Lewis was born on October 21, 1954, to William and Margaret Gow in Dunfermline, Scotland. She went to school at Queen Annes High School and later graduated with a degree in business. She was a skilled seamstress which was her passion. She loved doing arts and craft work and spending time with her great grandchildren. Margaret met Bruce Lewis in 1971, when Bruce was stationed at the R.A.F. Alconbury Air Force Base in England. Margaret and Bruce were married in England on May 27th, 1972 and started their home there. Margaret and Bruce moved to Ft. Dodge Iowa in 1990 were they happily retired. She is survived by her husband, Bruce of Ft. Dodge, Iowa; daughter, Denise Lewis of Spencer, Iowa; son, Jason Lewis (Robert Allen) of Allen, Texas; son, Sam Brown (Tara Lowe) of Huntingdon, England; granddaughter, Brettany (Brad) Riggs and great great grandchildren, Ayden, Zoey, Damien, and Gabriel of Spencer, Iowa. She is also survived by her two sisters Lynn Jackson and Janet (George) Hemmings both of Corby, England and many nieces and nephews. Memorials maybe left to the discretion of the family.

The family of Margaret Elizabeth Lewis created this Life Tributes page to make it easy to share your memories.

Send flowers to the Lewis family.