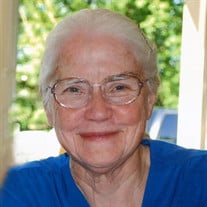 Marilyn Nadine Egli, age 85, beloved grandmother, mother, sister and aunt, passed away on July 3, 2020 at the Greenfield House in Tomah, Wisconsin with her family at her side. She was the daughter of the late Hiram J. and Alice A. Snell and was born in the family home in rural Duncombe, Iowa on November 18, 1934. She attended country schools in the Clarion and Fort Dodge areas and graduated from Fort Dodge Senior High School in 1952 and Fort Dodge (Tobin) Business College in 1953. She worked for the S.S. Kresge Company in Fort Dodge for a time and later in the office at Siegs. She was employed for many years at the Fort Dodge City Water Department. She married Carvel L. Egli of Manson, Iowa in 1958, and the couple lived together in Fort Dodge all of their married life. Marilyn is survived by daughter, Debra Egli James of Salina, Kansas; her son Douglas A. Egli and his wife, Elaine, of Fort Dodge; her daughter Dawn Egli Ostrander and her husband, James Ostrander of Lincoln, Nebraska; and her son David A. Egli and his wife, Melissa, also of Ford Dodge and by sixteen (16) grandchildren – Alex and Allison James; Lauren, Morgan, and Madison Egli; Greyson (Molly), Breck, Dodge, and Reagan Ostrander; and Abbigail, David (Duke), Olivia, Jonah, Levi, Ben, and Jesse Egli; and one great grandchild, Lana Egli Opsanger of Rosendal, Norway. She is also survived by brothers and sisters – Gordon D. (Cynthia) Snell of Cedar Falls, Iowa; Roger D. Snell of Duncombe, Iowa; Cheryl A. Smith of Duncombe, Iowa; Alecia R. (Douglas) Wooster of Fort Dodge and Pamela S. (Gary) Bygness of Coalville, Iowa. She was predeceased in death by twin sisters, Jean Snell and Joan Snell in 1933, daughter, Deann April Egli in 1970, father in 1994, mother in 2004, her husband, Carvel, in 2005, brother, Donald J. Snell, in 2011; sister-in-law, Verna Rae Snell, in 2012; brother-in-law, Ward Smith, in 1917; and sister-in-law, Joyce Snell, in 2019. Marilyn was a quiet, kind, and generous person. She had an incomparable work ethic and was always doing things for others. She was a loyal friend and, if you were her friend, you were friends for life. Marilyn never went to visit anyone without a small gift of some kind, whether it was a home-baked item or some little thing she thought the recipient would enjoy. She was devoted to her husband family and extended family and helped make the extended family a center of joyful activity and incredibly good food opportunities. She loved gardening, working around her home, and a good cup (pot) of coffee especially when it was paired with a sweet roll or an apple fritter. Visitation will be held at the Gunderson Funeral Home between 4 p.m. and 7 p.m. on Wednesday, July 8. The funeral will take be held at 10:30 a.m. at the Frontier Opera House at the Fort Museum with Pastor Emily Sauer of St. Olaf’s Lutheran Church officiating. The burial will take place at Fort Dodge Memorial Park Cemetery immediately after the service, and a luncheon will be served afterwards at the Opera House. Memorials may be directed to the discretion of the family.

Marilyn Nadine Egli, age 85, beloved grandmother, mother, sister and aunt, passed away on July 3, 2020 at the Greenfield House in Tomah, Wisconsin with her family at her side. She was the daughter of the late Hiram J. and Alice A. Snell and... View Obituary & Service Information

Send flowers to the Egli family.