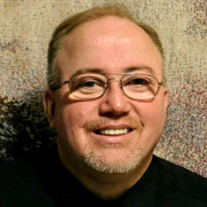 Mark Hansen, 53, of Fort Dodge died on Tuesday, February 15, 2022 at the Paula J. Baber Hospice Home. The family will have a come and go visitation from 6:30 – 8 p.m. Friday, February 25, 2022 at their home, 1713 2nd Avenue South Fort Dodge, IA 50501. A homegoing service will be held 10:30 a.m. Saturday, February 26, 2022 at CrossWay Church. The family would like to request that no black be worn, please wear bright colors, funny t-shirts, Chicago Bears/Cubs attire, or Donald Trump attire. Mark Hansen was born on June 15, 1968 to Warren and Linda Hansen in Cook County, IL. He grew up in Matteson, IL and graduated from Rich South High School in 1986. Mark went on to get his Masters of Art from the American Academy of Art. He then worked as a Disney Animator for a while. He also attended Hyles-Anderson Bible College, though was unable to graduate due to health concerns. Mark Hansen was united in marriage to Colleen Mae Hofmann on August 13, 1994 in Grants Pass, OR. Mark worked and mentored in many churches and enjoyed helping and ministering to missionaries. Mark had a close bond with his service dog, Machi. He also enjoyed old time movies and TV Shows, art, puzzles, books about history and religion, Fox News, and support groups on Facebook for meningioma. Mark is survived by his wife, Colleen; daughter, JoAnna; four siblings, Steve, Michelle, Jon, and Jamie, and their spouses; 21 nieces and nephews; and 11 great nieces and nephews. He was preceded in death by his parents, grandparents, great aunts and uncles, and various other family members. In lieu of flowers, memorials may be directed to the discretion of the family.

The family of Mark Hansen created this Life Tributes page to make it easy to share your memories.

Send flowers to the Hansen family.