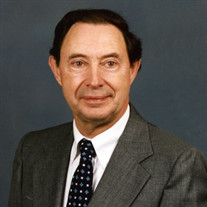 Rev. Marvin L. Hulse, 89, of Fort Dodge, died on Sunday, March 24, 2019 at Iowa Methodist Medical Center. Funeral services will be held at 10:00am on Monday, April 8 at First United Methodist Church, Fort Dodge with Rev. Andrea Kraushaar officiating. Burial will follow in the Nevada, IA Municipal Cemetery. Visitation will be held from 4:00 to 6:00pm Sunday, April 7 at Gunderson Funeral Home in Fort Dodge. Marvin Lee Hulse, the son of Walter and Ruth (Messerer) Hulse, was born on August 12, 1929 in Waterloo, IA. Following the death of his mother in 1935, Marv moved to his maternal grandfather's farm near Sumner, IA, where he was raised by his two aunts. He loved farm life, where he could milk the cows, drive the tractor, and ride his bike to the nearby one-room schoolhouse and country church. In 1948, Marv graduated from Sumner High School as Senior Class President and captain of the football team. While attending Westmar College in LeMars, IA, he met Jean Elaine Eichhorn. Following their graduation, they were married in Denver, CO on August 15, 1952 before moving to Naperville, IL, where Marv attended the Evangelical Theological Seminary. In 1955, Marv and Jean returned to Iowa where they served pastorates in the Evangelical United Brethren and United Methodist conferences for 40 years. The churches they served were Mason City Grace, Davenport Faith, Nevada First, Des Moines Immanuel and Sidney/Thurman. They moved to Fort Dodge in 1983 when Marv became Director of Admissions at Friendship Haven. A love of football continued throughout Marv's life, including officiating high school football for 15 years and ushering at Iowa State football games with his wife Jean for two decades. Every summer, Marv, Jean and their children, Janet and David, spent time in the family cabin at the Riverview EUB Church Campgrounds in Cedar Falls, IA. They also ventured across the country, driving to all 48 continental states. They made a special family pilgrimage to the Holy Land in 1976. Being grandparents to Sarah and Paul Matthews was a highlight of Marv and Jean's 55-year marriage. His wife Jean preceeded him in death on January 4, 2008. He was an active member of First UMC during his 36-year residence in Fort Dodge. On November 30, 2017, Marv married Ruth Smid. In retirement since 1992, Marv was also a long-time member of Golden K and a 1000 hour volunteer member of Pride in Community Appearance (PICA). Marv is lovingly remembered by his daughter Janet and son-in-law Greg Matthews of Olathe, KS; son David Hulse of New York City; granddaughter Sarah Matthews and her husband Ferry Rahman of Hanoi, Vietnam; grandson Paul Matthews and his wife Whitney of Kansas City, KS; brother-in-law Byron Bowsher, nephew Bob Bowsher and niece Linda Leisegang of Colorado. Memorials will be directed to First United Methodist Church, Fort Dodge.

The family of Rev. Marvin L. Hulse created this Life Tributes page to make it easy to share your memories.

Send flowers to the Hulse family.