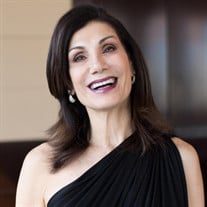 Mary Lou Bonventre Wahby died Wednesday in her home surrounded by her family. She was 70 years old. Mary Lou is survived by her husband, Dr. Samir Wahby; children, Dr. Aziza Wahby, Riad Wahby, and Raffaela Kalmar; grandchildren Luca and Claudio Kalmar; mother, Mrs. Raffaela Bonventre; siblings, Peter Bonventre, Vincent Bonventre, Joseph Bonventre, Amelia Belizaire, and John Bonventre. Mary Lou was born August 30, 1950, in Brooklyn, New York. She was raised in Douglaston, New York, and in her youth she was a medal-winning swimmer, a fierce competitor who’d win race after race with remarkable grace and grit. A graduate of Beaver College (now Arcadia University) in Pennsylvania, she then earned a Bachelor of Science Degree in Nursing from Adelphi University in New York, and later she and her younger sister Amelia were a highly regarded dynamic duo, nurses who worked at the Brooklyn Hospital, where their late father, Dr. Martin Bonventre, was Director of Medicine, and where they met a pair of residents whom they would one day marry. In 1982, Mary Lou moved with her family to Fort Dodge, and became with her husband, Dr. Wahby, valued members of their community. And so it was wherever she was: When she walked into a crowded room, you knew it. Your gaze went right to her just like that, to her beauty and elegance, her golden smile and infectious laugh, and if you were lucky, you got a hug and a kiss and were warmed in her embrace. Among her many virtues, Mary Lou was what you would call an appreciator—a woman who recognized and valued and cherished the full worth of the people she loved, the books she read, the countries she visited, especially her beloved Sicily, the ancestral homeland of her two grandfathers. Each of her three children and each of her numerous nieces and nephews will tell you that Mary Lou was their biggest fan, someone who took the time to listen, someone who cared and understood, someone who lavished them with praise as the smartest and the most talented and prettiest and the handsomest, and when she was done, they were struck by her kindness and generosity, and their world seemed like a better place because she was in it. Not that Mary Lou wasn’t without her faults. To this day, tales of her questionable driving skills can send her mother and siblings into sustained fits of laughter. Like the time she drove her father home, and when the good doctor got out of the car, he said, gently but firmly,“You know, Mary Lou, it’s not a requirement that you hit every pothole in the road.” As the song goes, it’s the laughter we will remember, alongside the many blessings of her love. And even though little Luca and Claudio were denied so many years of her affection and devotion, it’s a good bet they will always feel, somewhere inside them, and often without even knowing it, that their Nonna is with them. For that is how powerful Mary Lou’s love for them was, as it was for all of us whose great good fortune was to love her in return. In lieu of flowers, donations can be made in Mary Lou Bonventre Wahby’s memory to the Melanoma Research Foundation by visiting https://melanoma.org. There will be no public service because of the ongoing pandemic.

The family of Mary Lou Wahby created this Life Tributes page to make it easy to share your memories.