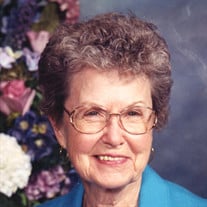 Mary Ellen, daughter of Clay Dean and Gretchen Leah (McClain) Stout, was born on a farm southwest of Fremont, IA on July 4, 1922, and she passed away August 18, 2019 at the age of 97. She attended country school at Cedar Creek and High School at Fremont, graduating in 1940. She went to business school in Oskaloosa, IA and after taking civil service tests she secured employment during World War II at the Pentagon in Washington D.C. She returned home when her high school sweetheart, Robert Wolfe, returned from serving in Europe. They were married on March 15, 1946, at the Methodist Church in Ottumwa, IA. They lived in Riceville, IA for seven years and became parents of two children, Robert Dean and Rebecca Ann. In 1954 they moved to Eagle Grove, IA where her husband was High School Principal. Mary Ellen worked at a bank for a period of time and then for Dr. D. Varland, a dentist for 19 years. Mary Ellen and Bob retired in 1983, and enjoyed traveling to all 50 states and all the Canadian Provinces as well as 8 foreign countries. For awhile they wintered in Arizona for 3 months. They enjoyed Ballroom dancing in Arizona and places in Iowa and Minnesota. They went to Europe to celebrate the 50 years of WW II. In 2004, they attended the dedication of the WWII Memorial in Washington D.C. Mary Ellen was a member of the First United Methodist Church in Eagle Grove, Rebecca Circle, beta Sigma Phi, and was a past member of Eastern Star. Mary Ellen is survived by her two children, Bob (Carol) Wolfe, Lincoln City, OR; Becky Sommerfeld, Fort Dodge, IA; five grandchildren, six great grandchildren and four step great grandchildren. She was preceded in death by her parents, son-in-law, Bruce Sommerfeld and Bob, her husband of 65 years. Memorial services will be 10:30 a.m. Wednesday, August 21, at the Eagle Grove United Methodist Church. Interment will follow in Rose Hill Cemetery in Eagle Grove. Visitation is 4:00 to 7:00 p.m. Tuesday, August 20, at the Eagle Grove United Methodist Church. Arrangements have been entrusted to Gunderson Funeral Home & Cremation Services.

Mary Ellen, daughter of Clay Dean and Gretchen Leah (McClain) Stout, was born on a farm southwest of Fremont, IA on July 4, 1922, and she passed away August 18, 2019 at the age of 97. She attended country school at Cedar Creek and High School... View Obituary & Service Information

The family of Mary Ellen Wolfe created this Life Tributes page to make it easy to share your memories.

Send flowers to the Wolfe family.