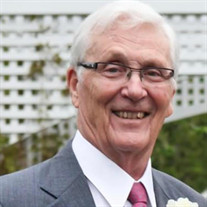 Merven Haugen, 92, of Fort Dodge, died November 8, 2020 at the Simpson Center of Friendship Haven. A private family service will be held Friday at St. Olaf Lutheran Church followed by burial and military honors at North Lawn Cemetery. A Celebration of Life will be held at a later date. Gunderson Funeral Home is entrusted with the arrangements. Merven is survived by his children; Teri (Pastor Terry) Knudson of Minneapolis, MN, Tami (Tim) Bemrich of Des Moines, Kris (Joel) Dekkers of Fairmont, MN, Scott (Patti) Haugen of Fort Collins, CO, Karla (Randy) Berg of Somers, and Sara Thein of St. Louis, MO; 18 grandchildren, 13 great-grandchildren; and his sister Martha Gustafson. He was preceded in death by his wife Janet in Nov. 2005, his parents Berge and Madgalena (Hamre) Haugen, and his sisters Johanna Wille, Sylvia Chadwick and Margaret Fevold. Merven B. Haugen was born September 19, 1928. He graduated from Fort Dodge Senior High in 1946 and served in the U.S. Army being honorably discharged in January 1948. He was recalled to serve again in August 1950 and served until 1951. Merven was married to Janet Moburg on September 24, 1949 at the Little Brown Church, Nashua. Merven graduated from Iowa State Teachers College in Cedar Falls. Teaching math and driver’s ed, in Boxholm and Estherville before moving to Fort Dodge in 1964, where they raised their family. Merven was active with many hobbies including racquetball, golf, canoeing, yardwork and he was especially proud of his roses. Eating ice-cream and long walks with his beloved dog Maggie, as well as time spent with family were among his favorite things to do. Merven was a member of St. Olaf Lutheran church and served as a volunteer at TRMC for many years. Memorials may be directed towards St. Olaf, Unity Point (TRMC) Auxiliary or Friendship Haven.

The family of Merven Haugen created this Life Tributes page to make it easy to share your memories.