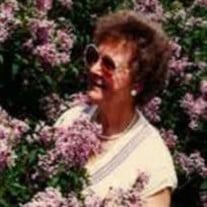 Mina Irene (Thomas) Landes, a longtime Fort Dodge community environmental and conservation activist, passed away peacefully on September 20, 2021 at the age of 99. Mina was born in Lone Tree, Iowa (near West Branch) on March 15, 1922 to Emma (Zinkula) and Elmer Thomas. Mina graduated from West Branch High School at age 16 and then as a registered nurse in the Nurse Cadet Corps, Copley Hospital School of Nursing, Aurora, IL in 1946. She married Max Landes in 1945 and they moved to Fort Dodge in 1947 where they raised four children. Mina was raised on a farm in southeast Iowa where she developed her love for the out-of-doors. She worked part-time as a registered nurse in Fort Dodge for 5 years, but she was known mainly for her active volunteer life in many organizations, including Camp Fire, Phil Fox Chapter of the Izaak Walton League of America (IWLA), First United Methodist Church, Fort Dodge Women’s Club, PEO, and the National T.T.T. Society, Hawley and Feelhaver Schools’ Parent Teachers Association, League of Conservation Voters, League of Women Voters, North American Bluebird Society, Iowa Ornithologists Union, and the National Arbor Day Foundation. Mina was more than a volunteer, however, often serving as President of most organizations she joined. Throughout her life, Mina believed strongly in the importance of giving back, especially within organizations that supported children and the environment. Mina was best known for her work at the 30-acre Children’s Forest in Kennedy Park, north of Fort Dodge, which she tended with loving care from 1964 until her move to Friendship Haven in 2015. During one year alone, Mina carried in 666 gallons of water, 1,370 bags of leaves for mulch, organized tree planting and school field trips, drove 1,630 miles, and spent 360 hours in service to the Children’s Forest, thus earning her the distinction of “Mother of the Children’s Forest.” For her dedication, she was awarded an individual National Conservation Award by the IWLA in 1985, the Teddy Roosevelt Award in 1992, and Fort Dodge’s Conservationist of the Year in the 2000’s. In 2005, Mina received a Citation of Appreciation from the Webster County Conservation Board “for outstanding contributions to the Community and Citizens of Webster County, Iowa, in the Pursuit of Environmental Education, Conservation Awareness, and Exemplary Stewardship of Our Natural Resources.” Mina was ahead of her time in promoting and adopting a simpler lifestyle, believing that we should reduce our use of unnecessary “things,” that we should reuse and repair everything possible, conserve water, and recycle whatever we can. Her other awards included The Luther Halsey Gulick Award, Camp Fire Girls, Inc. (1969); John Tobin Appreciation Award, IWLA (1978), the Lions Club Community Service Award (1979), and The Fort Dodge Education Association Friend of Education Award (1979-80). In 2001, Mina and Max became the Most Respected Citizens of the Year and served as Grand Marshalls of the Frontier Days parade, an honor awarded annually “to the citizens deemed to have been of most service to their fellow man and the Fort Dodge Community.” Mina was also involved in the Webster County Conservation Board’s acquisition of Camp WaNoKi, the former Camp Fire camp southwest of Fort Dodge. Mina was predeceased by her son Jeffry (2001) and her husband Max (2007). She is survived by her three daughters, Cynthia (Zuhdi) Lababidi, Columbia, MO; Nancy (Joe Loomer) Landes, Colorado Springs, CO; and Laura (Tom) Kelecy, Colorado Springs, CO; her daughter-in-law, Diana Landes, Lakeside, CA; her sister, Mary Ann Meder, West Branch, IA; her grandchildren, Dina (Matthew) Wiggins, Los Angeles, CA; Sami (Carrie) Lababidi, Boulder, CO; and Maxwell Landes, Lakeside, CA; and her great-grandchildren, Nadia and Matthew Lee Wiggins, Los Angeles, CA. No services are planned at this time, but donations in Mina’s memory may be sent to the Friends of Webster County Conservation, 1415 Nelson Ave, Fort Dodge, IA 50501. You may also honor Mina by planting a tree - in your backyard or wherever you choose!

Mina Irene (Thomas) Landes, a longtime Fort Dodge community environmental and conservation activist, passed away peacefully on September 20, 2021 at the age of 99. Mina was born in Lone Tree, Iowa (near West Branch) on March 15, 1922 to Emma... View Obituary & Service Information

The family of Mina Irene (Thomas) Landes created this Life Tributes page to make it easy to share your memories.