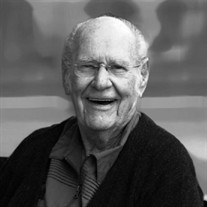 R.C. “Dick” Freed got his wings on December 2, 2020, but a public service to honor him was postponed due to the Covid pandemic. The ashes of Dick and his wife, Eloise, were interred together during a private gathering on December 10, 2020 in Dayton Memorial Cemetery. A public Celebration of Life service for Dick is scheduled for Monday, September 27, 2021 at 11:00am at Immanuel Lutheran Church in Burnside, IA. The family will receive friends at 10am prior to the 11am service. Masks are requested. Dick’s full obituary can be found at https://www.gundersonfuneralhome.com/obituaries/R-C-Dick-Freed/#!/Obituary In lieu of flowers, please consider making a donation to Immanuel Lutheran Church through Gunderson Funeral Home, 1615 North 15th Street, Fort Dodge, IA 50501. Richard Chandler Freed was born on July 22, 1925 at home on RR1 Ft. Dodge, Iowa to Maye and Earnest Freed. He had two older brothers. He graduated from Burnside High School in 1942. Dick enlisted in the Navy and served in WWII. After serving, he worked in the Union Trust & Savings Bank in Burnside. In 1948, Dick met Eloise Matthews and they were married six months later. They lived in Burnside where Dick became bank manager and they had their first daughter, Jann, followed by their second daughter, Brenda. Dick collected coins and also old cars, including a 1929 Model A Ford he restored. Dick and Eloise enjoyed drives, with their daughters in the rumble seat. Dick worked in the bank for 31 years where he also sold insurance through his R.C. “Dick” Freed Insurance Agency. A lover of numbers, he relished investing and trading. He retired at age 55 and enjoyed 32 years in Mesa, AZ. During “retirement” Dick got his real estate license and sold Arizona real estate. Dick was a Shriner for 50 years, including the Des Moines Za-Ga-Zig Nomads, and then Ft. Dodge Zags motorcycle clubs. He was a lifelong member of the Lutheran Church. Dick loved having fun, whether playing the organ, bowling, golfing, swimming or dancing with Eloise. In 2010 Dick and Eloise moved to Scottish Rite Park in Des Moines to be close to their daughter Jann and family. He continued to be active and always greeted residents and staff with a smile. Dick and Eloise enjoyed traveling throughout North America in their motor home. They also visited Europe and China. One of many cruises included the inter costal waterway of Alaska with their family in celebration of their 50th wedding anniversary. Dick celebrated 70 years of marriage to Eloise before her death in 2018. Dick is survived by his daughter Jann Freed and husband John Fisher (Des Moines) and three grandsons, MacLean (and Jessica Barrett, Brooklyn, NY), Marshall (San Francisco, CA) and Austin (Des Moines), daughter Brenda Freed and husband Michael D’Eath (Albert, TX), sister-in-law Georgia Freed, cousin Maxine Freed (both Fort Dodge) and several nieces and nephews. He was preceded in death by his parents, his brothers, Dorence and Chuck, and his wife Eloise. Please consider a donation to Immanuel Lutheran Church in memory of Dick Freed, and send to Gunderson Funeral Home, 1615 N. 15th St., Ft. Dodge, IA 50501.

R.C. &#8220;Dick&#8221; Freed got his wings on December 2, 2020, but a public service to honor him was postponed due to the Covid pandemic. The ashes of Dick and his wife, Eloise, were interred together during a private gathering on December... View Obituary & Service Information

The family of R.C. "Dick" Freed created this Life Tributes page to make it easy to share your memories.

Send flowers to the Freed family.