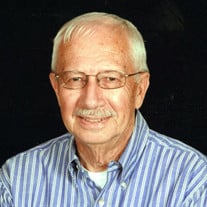 Raymond Stanley, 81, of Fort Dodge, passed away on Wednesday, February 24, 2021 at UnityPoint Health Trinity Regional Medical Center in Fort Dodge. Services will be 10:00 AM Saturday, February 27, 2021 at the First Presbyterian Church in Fort Dodge. The funeral will be live-streamed from the First Presbyterian Church Facebook page or on YouTube by clinking the following link: youtube.com/c/FPCFortDodge. Entombment will be at the Chapel of Peace Mausoleum at North Lawn Cemetery in Fort Dodge. Visitation will be from 4:00 PM - 6:30 PM on Friday at Gunderson Funeral Home & Cremation Services in Fort Dodge. Face coverings will be mandatory at both the funeral service and visitation. Raymond Edward Stanley, the son of Alvah and Violet (Henderson) Stanley, was born December 13, 1939 in Aikin, Minnesota. Ray graduated from Fort Dodge Senior High School and then moved to St. Paul, Minnesota. He graduated from the University of Minnesota with a BA in Medical Technology. Ray worked at Trinity Regional Medical Center in Fort Dodge during high school where he did janitorial work, served as an orderly and drove ambulance. On June 19, 1959, Ray married Dorine Beach. The couple later divorced. Ray was rehired at Trinity Regional Medical Center on April 23, 1962 and retired as the Manager of the Laboratory, Material Management and Information Systems on April 23, 1999 after a total of 40 years of faithful service. On March 5, 1982, Ray married Jean Alberts and together they made their home in Fort Dodge and also at their cabin home at Spirit Lake. Ray taught at night at Iowa Central Community College as their Laboratory Instructor for the Medical Assistant Program for 20 years from 1964 to 1984. Ray was an active member of First Presbyterian Church in Fort Dodge. He was an ordained elder, member of the Church Session, and an elder for KidZone daycare at First Presbyterian. He also served on the Church Property & Finance Ministry Team. Ray volunteered at Wheelchair Ministry, participated in international mission trips and was a volunteer at the Presbyterian Camp on Okoboji. He was a board member at Lakeshore Center (a Presbyterian Camp) and served as Interim Administrator of the Presbyterian Camp in 2006. He was also the project manager for the Lakeshore Retreat Center from 2007 and 2008. Ray was a past president and treasurer of the Fort Dodge Swim Club and a former board member at the YMCA. He is survived by his wife Jean; his three sons Mark (Joan) Stanley of North Carolina; Murray (Stacey) Stanley and Michael (Gretchen) Stanley both of Fort Dodge; and his stepson, David Alberts of Fort Dodge; 10 grandchildren, Chelsey Stanley, Nick Stanley, Zach Stanley, Alex Stanley, Taylor Stanley, Ryan Stanley, Samantha Brown, Noah Stanley, Christian Stanley, and Maurita Alberts along with 12 great grandchildren. Ray is preceded in death by his parents. Memorials may be left to the discretion of the family.

The family of Raymond Edward Stanley created this Life Tributes page to make it easy to share your memories.

Raymond Stanley, 81, of Fort Dodge, passed away on Wednesday,...

Send flowers to the Stanley family.