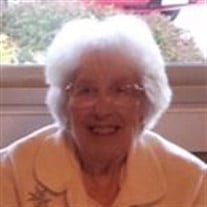 Rhoda Andrews, 99, of Fort Dodge, passed away on Tuesday, December 10, 2019 at the Fort Dodge Health and Rehab. Services will be 2:00 PM on Friday, December 13, 2019 at the Gunderson Funeral Chapel in Fort Dodge. Visitation will be one hour prior to the services on Friday at the Gunderson Funeral Home and Cremation Services in Fort Dodge. She is survived by her two children, Sandra Patterson and Ted (Kim) Andrews Jr. both of Fort Dodge; seven grandchildren, Mark (Yangjin) Patterson, Todd (Sally) Andrews, Aaron Andrews (Jesse Meyer), Tavia Andrews, Marissa Andrews, Melissa (Ernesto) Hermosillo and Matt Brockway and seven great grandchildren, Evan, Brandon, Tristen, Maddy, Drake, Taliah and Zuri. She is preceded in death by her husband, Theodore Andrews Sr., her parents, son-in-law, Jerry Patterson and her five siblings. Rhoda Lohse, the daughter of Joe and Emma (Turner) Lohse, was born October 1, 1920 in Ohio. She spent her youth in Ohio and moved to Fort Dodge after her marriage to Theodore Andrews Sr. in 1941. Theodore passed in 1949, and Rhoda eventually found a job at the Geo. A. Hormel Co. and worked there for 30 years until her retirement in 1982. Rhoda was a very active member of the Church of God in the Coleman District, teaching Sunday School and playing the piano. She became a member at Epworth United Methodist Church after the Church of God closed.

The family of Rhoda Andrews created this Life Tributes page to make it easy to share your memories.

Rhoda Andrews, 99, of Fort Dodge, passed away on Tuesday, December...

Send flowers to the Andrews family.