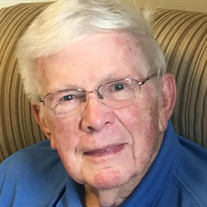 Richard (Dick) Neil Broer was born on April 8, 1937 in Eldora Iowa to Jesse and Helen Broer. He was raised on his family farm and attended school in New Providence, a small rural town. He attended University of Iowa, being part of Acacia Fraternity and active on campus, earning a Bachelor of Science degree. He went on to get his Master’s degree for Mortuary Science in St. Paul, Minnesota. He met his soon bride to be, Margaret Mundt, in a marriage & family class at University of Iowa. It was love at first sight. Dick & Marg were married August 14th, 1960 in Ida Grove, Iowa (Marg’s hometown). They soon moved to St. Paul, MN where Dick began his work as a mortician and quickly discovered his calling in life insurance. He learned about Northwestern Mutual Life, where he began a life-long career with NML. What an amazing career he had! His love and passion for helping people and families plan for the future was a perfect match. Above all, faith and family came first for Dick. He volunteered often at First United Methodist Church and then First Presbyterian Church in Fort Dodge. He was involved in numerous groups such as being an Elder, Deacon, Bible at Breakfast, Sunday School Teacher and numerous other planning groups and roles. Dick was an active Hawkeye and had nothing but fond memories of University of Iowa. He sported his black & gold attire often! Dick was quite active in the Fort Dodge community, which he called home. As a member of Rotary, Sertoma, Elks, Cotillion, wheelchair outreach, reading with kids at the Butler elementary reading program, bridge group, and supporting his daughters, Melanie (Mel) and Valerie (Val) throughout their high school careers as Dodgers. Dick was a very visible community member in Fort Dodge. His life passion was to serve and help others. You could always find Dick with a great smile on his face, hearty laugh, and genuine hug. Friends played an important role in Dick’s life as he treasured his friends. Those left to cherish his memory are his wife of 60 years, Margaret, and daughters Melanie Krogman Broer (San Diego, California) and Valerie Ruden Broer (Rochester, Minnesota) and their spouses John Krogman and John Ruden. Four grandchildren include Emily and Jackson Krogman, and Jamie and Jessie Ruden. He is survived by brother David Broer, of South Dakota, and nieces, nephews and other extended family. Dick was preceded in death by his parents, Jesse and Helen, and mother and father-in-law, Charlotte and Fred Mundt, along with his older brother, Robert Broer, of California. A Celebration of Life/Memorial is scheduled for 11:00 am on July 10th, 2021, Saturday, at First Presbyterian Church in Fort Dodge, Iowa. A catered lunch will be provided immediately following at the church campus. Dick’s family looks forward to honoring and celebrating his life with all of you! www.gundersonfuneralhome.com

Richard (Dick) Neil Broer was born on April 8, 1937 in Eldora Iowa to Jesse and Helen Broer. He was raised on his family farm and attended school in New Providence, a small rural town. He attended University of Iowa, being part of Acacia... View Obituary & Service Information

The family of Richard (Dick) Neil Broer created this Life Tributes page to make it easy to share your memories.

Send flowers to the Broer family.