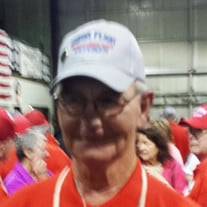 Richard A. ‘Dick’ Holst, 73, of Fort Dodge, died Sunday, December 8, 2019, at UnityPoint Trinity Regional Medical Center. A service honoring Dick’s life will be 10:30 a.m. Friday, December 13, at First Baptist Church. Interment will follow in North Lawn Cemetery with military graveside honors presented by V.F.W. Post No. 1856, and the Iowa Army National Guard. Visitation is 6:00 to 8:00 p.m. Thursday at Gunderson Funeral Home & Cremation Services. Memorials may be directed to the discretion of the family. Richard is survived by his wife, Pat; his children, Bryan (Amanda) Holst, and Melissa Holst, all of Fort Dodge; grandchildren, Kolby Wilson and Tristen Holst; siblings, Mark (Dixie) Holst, Lake City; Rosey (Mark) Licht, Clare; Sondra Doughty, Fort Dodge; Rhonda (Michael) Fiorzo, Green Bay, Wisconsin; sister-in-law Deb (Darrel) Jones, Auburn; and brother-in-law Ron (Molly) Berns, Fort Dodge; and many nieces and nephews. He was preceded in death by his parents and two brothers, David and Frederick Holst. Richard Allan Holst, the son of Martin and Bernice (Steen) Holst, was born April 19, 1946, in Fort Dodge. He attended school at Manson and was drafted into the U.S. Army where he served as a gunner in the artillery during Vietnam. Following his discharge, he returned to Knierim. Richard did carpentry work, worked at a box factory and Iowa Beef Processors. Richard was united in marriage to Patricia Thul on September 24, 1977, at First Baptist Church. He was a construction worker with Kolacia Construction and worked for Webster County Maintenance as a supervisor. He then went on to work at Beisser Lumber from where he retired. Most recently he worked at Fort Frenzy as their maintenance man. He was a man who took great pride in his meticulous work. Richard was a life member of V.F.W. Post No. 1856 and was a member of First Baptist Church. He loved to play golf and cribbage was his favorite of many card games he enjoyed. He loved to play slo-pitch softball, watch races and football among other sports. He was an avid fan of the Kansas City Chiefs and Iowa Hawkeyes. Richard went on the Honor Flight for Vietnam Veterans. He was a fun loving, easy going guy who loved to laugh and have a good time. He treasured spending time with his grandchildren and attending their many events.

The family of Richard A. 'Dick' Holst created this Life Tributes page to make it easy to share your memories.

Send flowers to the Holst family.