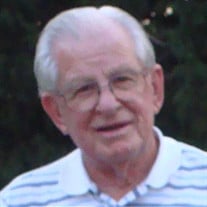 Richard “Dick” Earl Whitcome, 96, of Fort Dodge, died October 17, 2019 at Friendship Haven. Visitation will be held Wednesday, October 23, 2019 from 4:00 p.m. until ending with a vigil service at 6:00 p.m. at the Tompkins Celebration Center of Friendship Haven. The Mass of Christian Burial will be held 10:30a.m. Thursday, October 24, 2019 at Corpus Christi Church. Interment and military honors will be held in Corpus Christi Cemetery. Arrangements have been entrusted to Gunderson Funeral Home and Cremation Services. Dick is survived by his son, Christopher Whitcome and daughter-in-law Deborah (Przekaza) Whitcome,of Cary, IL.; grandsons David, of Kenosha, WI, and Nathan, of Cary and Ames, IA; and daughter Cindy Whitcome of Boston; many nieces and nephews and a circle of friends. He was preceded in death by his beloved wife Rose Mary (Reiter) Whitcome, his parents and his siblings, Thelma Fisher, Williard Whitcome, Marjorie Ziems and Beverly Sterns. Dick was a proud, life-long resident of Fort Dodge, born to Edward and Bertha (Pierce) Whitcome in Fort Dodge on January 14, 1923. He served as a Navy Air Corps Carrier pilot (1942 – 1945) in the Pacific during World War II and continued his love of flying as a crop dusting pilot and amateur pilot for many years. He attended Iowa Central Community College and then graduated from Iowa State University with a degree in mechanical engineering. He worked in the gypsum industry, mostly as engineer and plant manager at Celotex Corporation. More recently he was known for serving as one of the models for the Silo Mural in Fort Dodge. Dick met his wife of 62 years at a friend’s wedding. They were married at St. Joseph’s Church in Barnum on October 25, 1952. She left her Barnum home and joined him in the Fort Dodge neighborhood where they resided for 50 years. While raising their family, they enjoyed gardening, fishing, camping and back-yard bonfires. Their family and friends were the most important focus of their lives and a source of joy and contentment. Dick was also an accomplished golfer who spent many hours on the course in his retirement. Dick was a resident of Friendship Haven and involved in many activities there. He was a long-time parishioner of Corpus Christi Church where he served as a lector and eucharistic minister. In lieu of flowers, please consider making a memorial donation to a charity of your choice.

The family of Richard "Dick" Whitcome created this Life Tributes page to make it easy to share your memories.

Send flowers to the Whitcome family.