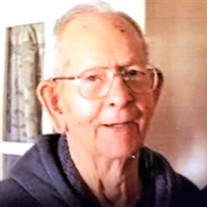 Services are being led and held by the family of Robert Adair Shaw. Robert Adair Shaw Jr. was born June 29, 1928, in Pottawattamie County, Iowa to Mary B. and Robert (Robin) A. Shaw. He was raised in Eagle Grove, Iowa. He graduated high school in 1948, and entered the 20th Air Force the same year. He served in the states and the South Pacific. He spent most of his time on B-29 Bombers. To this day he hates heights. Upon his return to Eagle Grove, Robert spent seven years with the Iowa National Guard where he provided security for four presidents: H. Hoover, Eisenhower, Kennedy and Johnson. He met and married Lois Lamar (deceased) and two sons, Robert J. Shaw (deceased) and Michael E. (Sharon) Shaw, Federal Way, Wash.; sons, Casey and Devin. The family moved to Seattle where Robert worked for Boeing as an instrument specialist. After the marriage dissolved in 1960, Robert returned to Eagle Grove and began his career in law enforcement as an officer for the Eagle Grove Police Dept. In 1961, he moved to Clarion and became a deputy sheriff of Wright County, Iowa. This is where he met and married Lenna (Wright) Corey (deceased); children, Mary Ellen Oliver (John, deceased), of Woolstock, Iowa; and Robin Adair (Joey) Shaw, of Perry, Iowa; grandchildren, Breean (Rodney) Hoyt, of Clarion, Iowa; Jenny Oliver-Carrick, of Clarion, Iowa; Logan Shaw, Perry, Iowa; great-grandchildren, Deja and Blayne Hoyt and Chaz Oliver. He is also survived by numerous nieces and nephews who will all miss their “Uncle Bill.” In 1968, Robert was elected sheriff of Wright County. In 1973, he attended the FBI National Law Enforcement academy at Quantico, Virginia. In 1978, Robert became Chief of Police for the city of Clarion, Iowa and held this position until his mandatory retirement in 1993. While in office, he started the ambulance service. After retirement, Robert wore many hats; Mayor of Clarion, locksmith, Clarion Area Transit Van and Veterans Transit Van Driver. He was also a member of the Mason’s Lodge in Clarion. He was Kaised in March of 1958 and recently received his 50 year pin. In his younger years, Robert enjoyed hunting, fishing and golf. He also enjoyed card games with friends and an occasional trip to the casino. He loved going in early to visit over coffee with “the guys” at Hardee’s where I’m told his jokes and stories will be sorely missed. He was very convincing when story telling, often telling the younger people that he came to Iowa on the orphan train. Many of the believed it! Robert was preceded in death by his wife Lenna, his parents, his siblings, Threlia (Tink) Johnston, Francis D. Johnston, Helen L. (Shaw) Hill, Patricia (Shaw) Straight, James G. Shaw and son Robert J. Shaw. He lived the motto ‘to protect and serve and a more honorable man I have never met!

Services are being led and held by the family of Robert Adair Shaw. Robert Adair Shaw Jr. was born June 29, 1928, in Pottawattamie County, Iowa to Mary B. and Robert (Robin) A. Shaw. He was raised in Eagle Grove, Iowa. He graduated high school... View Obituary & Service Information

The family of Robert Adair Shaw created this Life Tributes page to make it easy to share your memories.

Services are being led and held by the family of Robert Adair...

Send flowers to the Shaw family.