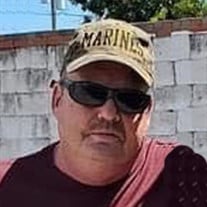 Roger Wayne Kruger, a.k.a. Uncle Roger, RW Toad or Roger Dollar, of Fort Dodge, passed away peacefully on Sunday, September 5, 2021, at the age of 67. Services for Roger will be 2:00 PM on Friday, September 10, 2021, at the Gunderson Funeral Chapel. A time of gathering for family and friends will be held on Friday from 1-2:00 PM at the Gunderson Funeral Home & Cremation Services. Burial with full military honors conducted by the VFW Post #1856 and the United States Marines Corps will be in Memorial Park Cemetery in Fort Dodge. Burial of his late wife Kay will also take place at that time at Memorial Park Cemetery. Roger is survived by his daughter, Michelle (Jesse) Cervene of South Carolina; three grandchildren, Kassandra (Kyle) Roderick, Tanner Cervene and Tyler Cervene and one great grandchild, Everly Grace Roderick. He is also survived by his brother, Russ (Kathy) Goebel and his two sisters, Julie Ferry and BetteJo (Johnny Lemmon) Wilson. Roger has three stepchildren, Hollie Bloom, Jennifer Bloom, and Michael Bloom, and several step grandchildren. He is preceded in death by his wife Kay, son Michael, sister Jacque Kruger and his parents. Roger Wayne Kruger, the son of Arthur and Dorothy (Erickson) Kruger, was born December 5, 1953, in Fort Dodge and graduated from Fort Dodge Senior High School in 1972. Roger enlisted into the United States Marines Corps after high school. He served during the Vietnam War and received an honorable discharge for his military service. After returning to Fort Dodge, Roger served in the Iowa Army National Guard. While in the guard Roger worked for the Illinois Central Railroad. In 1975, Roger married Deb Johnson and together they had two children. The couple later divorced. Roger later married Kay Bloom and together they made their home in Fort Dodge. Roger worked as a Correctional Officer for the State of Iowa retiring after 25 plus years of service. On October 15, 2016, Roger’s wife Kay passed away. Roger will be remembered as a very dependable workaholic but also one who loved to take family trips. He will be known for his love of food and cutting coupons earning him his nickname Roger Dollar. He never missed buying a lottery ticket or spending his time scratching off an Iowa Scratch Ticket. Roger never stopped serving his country. Roger was very active in serving his fellow veterans through the Marine Corps League.

Roger Wayne Kruger, a.k.a. Uncle Roger, RW Toad or Roger Dollar, of Fort Dodge, passed away peacefully on Sunday, September 5, 2021, at the age of 67. Services for Roger will be 2:00 PM on Friday, September 10, 2021, at the Gunderson Funeral... View Obituary & Service Information

The family of Roger Wayne Kruger created this Life Tributes page to make it easy to share your memories.

Send flowers to the Kruger family.