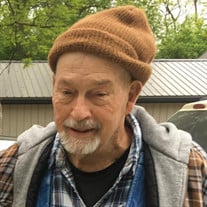 Roger Allen Van Gorp 83 of Rockwell City (Twin Lakes) formally from Des Moines was takeniw by Jesus to his heavenly home on December 24, 2020, to celebrate Christmas at Jesus' table. Jesus rescued him from his suffering with kidney failure. Praise The Lord! Roger was born in Des Moines on January 19, 1937. He was adopted at 6 weeks by Raymond and Dorothy (Webster) Van Gorp and raised to be a farmer. He started as a young child on the tractor and helping Dad farm, as a youth milking cows and delivering milk to AE Dairy before school-often late-and bailing hay to get in shape for football. He graduated from Bondurant High School in 1955, where he enjoyed sports, but not school work. After graduation he enjoyed playing on the local and the church baseball teams and also refereed different youth and high school basketball games. For several years he farmed in Madrid, Iowa but his Dad wanted to cut back so that farm was sold and he returned to the home place. He married Nina Ann Schmidt July 8, 1968 in Holstein, Iowa, He had a large cow-calf operation and farmed over 1000 acreas of corn and soy beans. In 1979, Roger raised sweet corn to sell at farmers markets; and then in 1980, he started truck gardening under the name of V-7 Produce (his cattle brand). Fresh produce, including strawberries, sweet corn, pumpkins (from a large you-pick patch) was sold at the homestead; as well as sweet corn and pumpkins at the markets. Hundreds of chickens and turkeys were raised and sold as fresh dressed. Small and large groups of kids toured the farm in the spring to see the baby farm animals and were given and planted green bean seeds to take home and grow. Groups would come in the fall to see the growing animals and pick pumpkin gourds to take home. Roger joined the Volunteer Delaware Township Fire/Rescue Department after a fire at the homeplace. Later, as the rescue captain, he upgraded the level of care to an EMT1 level. That training led Roger to part-time employment with LifeLine Rescue as an EMT1 and relief driver. He enjoyed helping people in all types of situations. His Des Moines home was always an open door welcoming strangers off Interstate 80 if broken down, or in storms, or anyone needed help. Youth groups would hang out there for pizza, ice cream and games, or just talking. Sunday School classes enjoyed sweet corn feeds or potluck suppers, card games with classmates or friends, and lots of dominoes. He loved and enjoyed people of all ages telling his stories and/or having fellowship. TheTwin Lakes cabin (known as Idiot's Delight) bought in 1969 also had a revolving door with many friends, company picnics, and the church youth groups activities. Very few weekends were quiet ones but water sports, wild card games, and fellowship was always welcomed and enjoyed. The cabin slept 22 in beds and many weekends they were filled. After leaving the farm in 1990, he began mowing lawns (I don't think I ever saw him mow lawn before that) and mostly outside odd jobs. He succeeded keeping very busy until his major brain bleed in 2011. Roger had been a team player in many roles. After marrying Nina, they took 2 mission trips to Quito, Ecuador, to work on a church addition and encourage Carlos and Karen Feijoo and family. On the second trip, they worked to clean up grounds for the Covenant Bible College of Ecuador. He was active player for Medicine for Mali, Africa, in its early years. Roger and Nina served for two weeks in five successive years to the Malians in rural villages. Months were spent planning, gathering material and packing needed supplies. Besides medical work, water lines and faucets were laid to differentt areas of the village and to the school. Another year Medicine for Mali provided 500 baby chicks to the villagers so Roger constructed portable chicken pens. Other years he helped and encouraged the farmers, and painted buildings. Roger was always visiting with the men and playing or entertaining the kids, lending a hand wherever needed all without learning the French or village langage. Roger and Nina went to Dubai, UAE, to encourage and have fellowship with Danie and Lori Splett family. Several cruises were taken to see God's creation in many Caribbean Islands as well as trips to California, Florida, several Hawaiian Islands, Arkansas, and the Gulf coast. His favorite trips were to Cozumel, Mexico, where he was Papa Roger to Carlos and Norma and their extended families. Many trips since 1980 were/are so special, as we continue to talk and email frequently to Carlos and Norma. Roger had been an active member of the Evangelical Covenant Church of Des Moines (now known as The Well). He served on the church board, ushered, and worked many years with the youth group. Since moving to Twin Lakes permanently in 2013, he became a member of the Pomeroy Evangelical Covenant church north of Pomeroy. Roger has been known to kids, young and old, as the "Candy Man". He loved and adored kids and they loved him, or at least, loved the candy. LOL Roger and Nina were active in projects at Twin Lakes Bible Camp, such as stripping the dining hall floor, putting in a brick walkway to Swede Bend Church, and organizing and building of split rail fencing around much of the camp grounds. Roger tried to be the rough, tough guy but to those who knew him well, he was a "teddy bear" with a heart of gold. He would give you the shirt off his back, or the $100 bill from his billfold, if you needed it. Roger will be greatly missed by his wife Nina of over 53 years, his grandson Jake (Kristin) Van Gorp and granddaughter Ginger Swensen, great grandchildren Grady, Addison, and Breckin Van Gorp, extended family and a host of friends. There will be a celebration of his life and shared memories Saturday January 16th at 1:30pm at Pomeroy Covenant Church 5 miles north of Pomeroy on Hwy 4.

Roger Allen Van Gorp 83 of Rockwell City (Twin Lakes) formally from Des Moines was takeniw by Jesus to his heavenly home on December 24, 2020, to celebrate Christmas at Jesus' table. Jesus rescued him from his suffering with kidney failure.... View Obituary & Service Information

The family of Roger Van Gorp created this Life Tributes page to make it easy to share your memories.