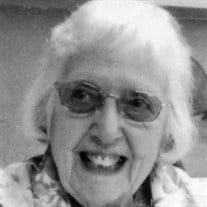 Ruth A. Miller, 100, passed away Thursday, March 11, 2021, at the Paula J. Baber Hospice Home. Funeral services will be 2:00 p.m. Saturday, March 13, at St. Paul Lutheran Church with the Rev. Kendall Meyer officiating. Interment will follow in Memorial Park Cemetery. Visitation is 1:00 to 1:45 p.m. Saturday at the church. Arrangements have been entrusted to Gunderson Funeral Home & Cremation Services. Ruth Agnes Kappmeyer, the daughter of Herman and Lena (Skubinna) Kappmeyer, was born on December 29, 1920, in Oelwein, Iowa. She graduated from Fayette High School in 1937 and Upper Iowa University in 1941. She also did graduate work at Iowa State University and Drake. She taught in high schools in Rinard, Jolley and Somers before marrying Dale A. Miller on May 21, 1949. She worked at United States Gypsum for seven years, and then taught at Tobin Business College for several years. A member of St. Paul Lutheran Church in Fort Dodge since 1956, she began working for the church and school in January 1964. Over the next 50 years she served the congregation in various positions, including school secretary, teacher, school pianist, church choir accompanist, church secretary, office manager, and treasurer. Although she retired in October 1994, she continued to regularly volunteer at the church until November 2013. Ruth is survived by her daughter Dayle Miller, Fort Dodge, son Gary (Pamela) Miller, Helotes, Texas, grandchildren Jaime Luna, Helotes, Texas, and Jonathan (Jennifer) Miller, Parkland, Florida, six great-grandchildren, Andrew, Joey, Henry, Alex, Kayli, and Kinsley, and special nieces Ashley Frideres and Kim Mlodzik. She was preceded in death by her husband Dale in March 1982, and her brother John Kappmeyer and his wife, LaMarr. Memorials may be left to the discretion of the family.

The family of Ruth Agnes Miller created this Life Tributes page to make it easy to share your memories.

Send flowers to the Miller family.