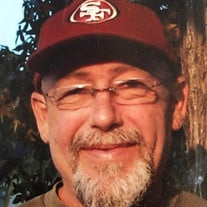 Scott Van Dyke, 58, passed away Sunday, March 17, 2019 at Trinity Regional Hospital, Fort Dodge, Iowa. There will be no services. Scott was born September 14, 1960, at Stanford University in Palo Alto, California. He attended school in Mountain View, California, and Muscatine, Iowa. He owned and operated his own landscaping business for most of his adult life. He was formerly married to Lydia Venegas of Springville, California. Scott deeply loved nature. He spent his free time fishing and camping. He was an expert on horticulture and gardening and could name every flower, bush, and tree on our many walks in gardens and woods. He will be interred near his favorite lighthouse in Pescadero, California. He is survived by his mother, Joan Van Dyke of Fort Dodge, Iowa, his sisters Viki Heckman of Fort Dodge, Iowa, and Lizabeth Zaehringer of Muscatine, Iowa, and his brother Joshua Van Dyke of Hollister, California, several nieces and nephews, and a step-son, Nicolas Quiroz of Santa Cruz, California. He was preceded in death by his father, Arthur Van Dyke, and an infant sister, Sheila Van Dyke.

The family of Scott Van Dyke created this Life Tributes page to make it easy to share your memories.