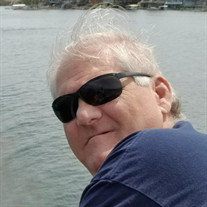 Steven Wayne Hollingshead, 62, of Fort Dodge, passed away Monday, June 22, 2020, at his home after a short illness. A time of gathering for family and friends will be on Saturday, July 11, 2020, from 1:00PM to 3:30P.M. at the Gunderson Funeral Chapel. A Memorial of Remembrance Service will be held following the gathering at 3:30PM on Saturday, July 11, 2020 at Gunderson’s. Steven is survived by his three children, Stephanie Hollingshead of Eldora, Iowa, Shawn Hollingshead of Fort Dodge, Iowa and Shane (Lauren) Hollingshead of Otho Iowa; six grandchildren, Zachary Bass, Rosa Calles, Carlos Jimenez, Alandra Palacios, Ariana Palacios, and Lillyana Palacios. He is also survived by a brother, Don and wife (Luana) Hollingshead of Williams Iowa and a sister, Kim and husband (Steve) Johnson of Webster city. Also lots of nieces and nephews Steven is preceded in death by his parents, Wayne and Velma Hollingshead and a brother Mike Hollingshead and Ex-wife Carol Hollingshead Steven Wayne Hollingshead, the son of Wayne and Velma (Faulkner) Hollingshead was born December 31, 1957 in Webster City, Iowa. Steve attended Webster City High School later graduating from Job Corps in South Dakota. Steven later got married to Carol Davis of Fort Dodge and had 3 children Stephanie Shane and Shawn later divorcing and becoming a single father after Carol passed away in 1996. Steven loved his grandchildren and spent much time over in Eldora with his daughter and grandchildren. Steven resided in Fort Dodge where he lived with his son Shawn Hollingshead and close by Shane Hollingshead. Steven loved going to casinos with his kids or by himself to pass time away. He loved his mom and family very much and was much saddened by the loss of his mother a few years ago followed by his brother Mike. He was loved by many and known for his jokes he would make sure could make a person smile. He was loved. Steven loved the outdoors. His greatest joy was his family and friends and going camping, fishing, cookouts, and the mountains in South Dakota. He just loved to be outside spending his time. Memorial may be left to the discretion of Stephanie Hollingshead at 1425 14th Ave Eldora, Iowa 50627, Shane Hollingshead or Shawn Hollingshead at 1602 5th Ave N Fort Dodge, Iowa 50501.

The family of Steven Wayne Hollingshead created this Life Tributes page to make it easy to share your memories.

Send flowers to the Hollingshead family.