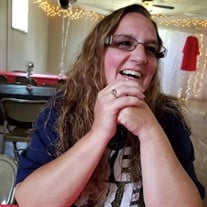 Tessy Marie Degner (Crawford), 44, of Fort Dodge, died Friday, December 24, 2021 at Trinity Regional Medical Center. A celebration of life will be held 4:00 p.m. Friday, January 7, 2022 at Gunderson Funeral Home and Cremation Services. A visitation will take place prior to the service from 3-4 p.m. on Friday, January 7, 2022 at Gunderson's. Tessy is survived by her two children Emily and Alec Degner, ex husband Terry Degner, niece Keely Degner, grandchild Christopher Warren, and mother and father-in-law Julie and Charlie Degner all of Fort Dodge. She is also survived by her sister Tara Crawford and her father Don Crawford of Washington. Tessy was preceded in death by her mother Donna Denham of Washington. Tessy Marie Degner was born on March 13, 1977, in Centralia, Washington to Don and Donna (Denham) Crawford. Tessy attended Centralia High School but decided to drop out to help take care of her sick mother with breast cancer and help pay bills. She worked as an in-home health care worker for an elderly lady to where she would cook, clean, and run errands for her. Shortly after her mother died, she met Terry Degner and moved to Fort Dodge in 1996. She was united in marriage to Terry on February 20, 1997, to where they had their first child in July of 1997 and their second in August of 1998. She worked for Walmart as a manager of the deli and the bakery. Tessy enjoyed spending time with her family and children, playing BINGO, going out with the girls and having a few drinks at Hy-Vee, and of course watching the Seattle Seahawks play football.

The family of Tessy Marie Degner created this Life Tributes page to make it easy to share your memories.

Send flowers to the Degner family.