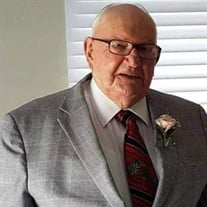 Thomas Ramon Engler, July 27, 1925-Nov. 29, 2020, was born in Mason City, Iowa, and grew up in Early, Iowa. It was there that he flourished as a high school athlete, played trumpet in the school band, and was a representative of his school as a member of an all-state vocal quartet. He never tired of telling stories about some of those crucial basketball games with his teammates! Tom’s parents were Cecil Francis Engler and Etoile Coral Hein Engler. His younger sister Ila was also athletic in school and beyond. Tom graduated from high school in June 1942 at age 16 and enrolled in Iowa State University that fall. Soon after, he joined the US Navy, serving in the Asian arena during World War Two. Returning as a veteran, he went back to school on the GI bill and completed his degree in general engineering. During that time Tom married his high school sweetheart, Jean Marie DeGarmo. After graduation from ISU, Tom and Jean lived briefly in locations both in Early and in Fort Dodge while he began his career in sales for the Electrical Engineering and Equipment Company. They found living in the Dodger Apartments a great way to make new lifelong friends, eventually buying their first home right across the street from the brand-new Fred N. Cooper School. Tom moved his family to Urbandale, Iowa, 1961-1963, to pursue advancement opportunities within his company. But the family missed their ties to Fort Dodge and being nearer to Early and extended family there. So Tom made a different career move in joining Electrical Materials Company and moving back to Fort Dodge. He was especially proud of studying hard those first years with Electrical Materials to complete his Professional Engineering certification! Eventually Tom was able to assume the presidency of the company, and to expand its size and scope with the acquisition of the Leighton Plumbing Supply. He valued his reputation for honesty, and of being a fair employer. In 1990 Tom retired. He and Jean enjoyed travel with friends and family for several years before Jean’s health prevented it. Activities that Tom enjoyed in his adult life outside of work were: leading Cub Scouts and Boy Scouts; coaching church league basketball; teaching Sunday School to rowdy boys; playing church league softball; serving in different capacities of leadership at First Presbyterian Church, playing bridge and cribbage, and golfing. If there was a sporting event on television, he would watch it! But his favorites were the Iowa Hawkeyes and the St. Louis Cardinals. He was a fan of big band music. He was a loyal friend to many and a great sender of birthday and anniversary cards to friends and family members. Tom was preceded in death by his parents, Cecil and Etoile, infant son Ramon, his sister Ila, son Gary and wife of 63 years, Jean. He was married in 2016 to Gloria Coleman Von Bank Magnusson Engler, who survives him. Other survivors are daughter Rona Patterson (Bruce); grandson Craig Patterson (Susie Schroeder) and great-grandson Calan; granddaughter Kara Winger (Russ); stepson Mike Von Bank (Trish); stepdaughter Vicki Simpson (Jim); brother-in-law John DeGarmo (Margaret); and nieces, nephews and their families. Family interment services were held at Union Cemetery in Early. Memorial services will be 1:00 p.m. on Saturday, September 11, 2021, at First Presbyterian Church with the Rev. Sara C.R. Hill officiating. Military honors will be presented by V.F.W Post No. 1856 and the United States Navy Honor Guard. Those wishing to send cards may send them to Rona Patterson, Box 785, La Center, WA 98629. Arrangements have been entrusted to Gunderson Funeral Home & Cremation Services.

Thomas Ramon Engler, July 27, 1925-Nov. 29, 2020, was born in Mason City, Iowa, and grew up in Early, Iowa. It was there that he flourished as a high school athlete, played trumpet in the school band, and was a representative of his school as... View Obituary & Service Information

The family of Thomas Ramon Engler created this Life Tributes page to make it easy to share your memories.

Send flowers to the Engler family.