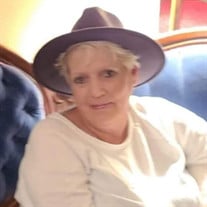 Tina Jean Nordstrom, 55, of Fort Dodge died Thursday, March 31, 2022 at Trinity Regional Medical Center. A service will be held 11 a.m. Saturday, April 2, 2022 at Our Saviour's Lutheran Church in Callender, IA. Visitation will take place from 4-7 p.m. Friday, April 1, 2022 at Gunderson Funeral Home and Cremation Services. Interment will take place at North Lawn Cemetery. Tina Jean Nordstrom was born on August 18, 1966 to Charles and Norma (Mathiason) Reetz. She graduated from Fort Dodge Senior High School in 1984. Later that year, she was united in marriage to Fred Nordstrom in Fort Dodge. Fred and Tina moved to Phoenix, AZ and their daughter, Ashley, was born. Tina and Fred later divorced. Tina worked for American Airlines for 19 years. While in Arizona, Tina entered into a commitment ceremony with Karen Blough. Tina and Karen had four happy years together until Karen’s sudden death. After 9/11 Tina decided to move back to Fort Dodge, IA to be closer to family. Tina made her home in Callender, IA. She worked as Assistant Manager at the Dollar Tree for several years and then worked for Casey’s until she couldn’t work because of her declining health. Tina is survived by her father, Charles “Bob” Reetz; daughter, Ashley (Tommy) Jondle; grandchildren, Bentley, MaKenna, Hunter, and Destiny; her siblings, Virginia (Ron) Feeley, Chuck (Leslie) Reetz, and Mark (Darcey) Reetz; and numerous nieces and nephews. She was preceded in death by her mother, Norma. Tina had many passions including gardening, her devotion to her cats, roller-skating, and moon and star gazing. She also loved cooking and was always up for trying new foods at least once. Tina also often decorated graves of strangers on Memorial Day with her sister, Virginia. Tina and Virginia also enjoyed spur-of-the moment roadtrips. Tina loved spending time with her grandchildren. Tina was loved and will be greatly missed by the many who knew her. In lieu of flowers, memorials may be directed to the discretion of the family.

The family of Tina Jean Nordstrom created this Life Tributes page to make it easy to share your memories.

Send flowers to the Nordstrom family.