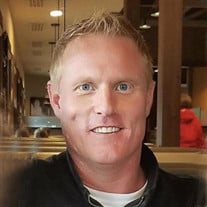 Thomas Ryan Baker died suddenly on February 14. He was 47. He leaves behind his daughters Lizzie and Eva, who were his two proudest achievements, of which there were many. Visitation will be held on Thursday, February 18 from 4-8 p.m. at Gunderson’s and funeral services will be Friday, February 19 at 1 pm at Grace Lutheran Church. Tommy was born January 11, 1974 in Bar Harbor, Maine, but lived most of his life in Fort Dodge, and most recently, Pocahontas. He is survived by his mother Sharon Johnson, step-father Kent Johnson and brother Steven Baker, all of Pocahontas. Daughters Elizabeth Baker and Eva Baker and their mother, Amy Presler, all of Fort Dodge, step-father Tom Richardson of Fort Dodge and his children Todd and Tonia, step-grandmother Dorothy Erickson of Humboldt. He is also survived by his nieces Bailey Baker of Fort Dodge and Gia Howell of Savannah, Ga. and his nephew Bradley Baker of Fort Dodge. He was preceded in death by his father Thomas Allen Baker Jr., his infant niece Sydney Baker, his grandparents Ted and Betty Erickson and Thomas Allen Baker, Sr. and Ruth Baker. Tommy graduated from FDSH in 1992 where he was student body president, crowned homecoming king and he also created Junior Civitan Club (which is still there to this day.) He also served as a page at the Iowa Capital his senior year. He went on to earn a Bachelor’s degree in political science from UNI, where he also played on the college hockey team. He was an excellent skater and taught his girls how to skate and participated in some hockey leagues as an adult. In 2000 he began a relationship with Presler and their union, though brief, gave them their greatest blessing in their girls. In 2008 he was united in marriage to Amy Calvert and their blended family included her daughters Taylor and Josie Shirbourn. The couple divorced in 2014. He worked mostly in sales and finance for car dealerships his adult life, but was pursuing a different line of work at the time of his death. Tommy had many wide and varied interests, but first and foremost was his love of music, soccer, landscaping and meeting new people and spending time with his family. Tommy never met a stranger and collected friends far and wide wherever he went. If you went anywhere with him it always took twice as long because he had to stop and visit with all the people he ran into. Everyone who met him remembered him as he made such an impression. He lit up every room he entered and was the life of the party. He will be very missed by his aunts, uncles and cousins, all of whom he was very close to. Every family gathering won’t be quite as bright without him and the laughs won’t be as loud, but there will be a lot more food left over. He made and created music in his spare time and played several instruments. Tommy had excellent taste in music and filled up several Ipods with all of his songs. Music was a special bond that he often shared with his brother Stevie. He loved listening to live music and spent many nights in Okoboji attending concerts and hanging out by the lake. In his early adult years, for a while he lived and worked in Okoboji and considered it a refuge for many years. He traveled overseas several times and particularly loved Germany and spoke the language fluently. One of the highlights of his life was when he was there during the World Cup and was able to revel in the event. He came to love the sport of soccer and participated in leagues and helped coach when his girls played. He was the G.O.A.T. at finding wild asparagus and gladly shared his bounty with those lucky enough to know him. Tommy loved his mom and stepdad’s farm and spent many hours helping his mom around the place working in the garden and helping her build and fix whatever she needed help with. He was a talented landscaper who loved to get his hands in the dirt and created plant designs and built many backyard ponds. He loved to work with his hands whenever he could and helped his stepdad Kent in planting and harvesting through the years. Tommy's daughters were the love of his life. He doted on Lizzie and Eva and was so proud of his beautiful girls. They now have the brightest angel in the sky looking over them, but losing their sweet dad at such young ages is an incredible loss. The hole he left when he died will never be filled, but we know that all those who loved him will also continue to love and support his girls as he would want. He lived life to the fullest while he was on this earth, which was cut short way too soon. His passing was a terrible shock to all who knew him and our hearts are completely broken. He will always be remembered for his huge (shit-eating) grin and his devotion to his friends and family and the great love he had for his daughters, his greatest supporters-his mom and Kent and his brother Stevie, the yin to his yang. “Remember kid, there’s heroes and there’s legends. Heroes get remembered, but legends never die.” Babe Ruth, The Sandlot.

Thomas Ryan Baker died suddenly on February 14. He was 47. He leaves behind his daughters Lizzie and Eva, who were his two proudest achievements, of which there were many. Visitation will be held on Thursday, February 18 from 4-8 p.m. at Gunderson&#8217;s... View Obituary & Service Information

The family of Tommy Baker created this Life Tributes page to make it easy to share your memories.

Send flowers to the Baker family.