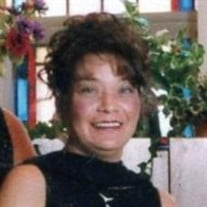 Veronica “Taco” Tonya Weiss, 61, of Fort Dodge, passed away on Sunday, June 27, 2021, at UnityPoint Health-Iowa Methodist Medical Center in Des Moines. A time of gathering for family and friends will be on Saturday July 3, 2021, from 2:00 PM to 4:00 PM at the Gunderson Funeral Home & Cremation Services in Fort Dodge. Veronica Tonya Espinoza, the daughter of Gary and Judy Espinoza, was born January 15, 1960, in Fort Dodge and graduated from St. Edmund's High School in 1978. She married Robert Weiss on March 24, 1979, in Fort Dodge. From that union they had two daughters. The couple moved briefly to Oklahoma before moving back to Fort Dodge. The couple later divorced. Taco worked at Taco Town on the Southside of Fort Dodge before she became manager of Pasquale's Pizza when it was located in Fort Dodge. She later worked at Community Pizza and Tap. She met Kerry Porter her longtime companion. The couple shared two sons together. They later parted ways. She enjoyed spending time outdoors tending to her roses. When her children were younger, she often sent them to the Dariette to get her favorite cherry dipped ice cream cone! Survivors include her four children, Jessica (Trent) Bockoven, Natasha (Steve) Tracy, Ryan Porter (Angie Vazquez) and Caleb Porter all of Fort Dodge; seven grandchildren, Mason, Triston, & Jace Bockoven, Kayla (Brandon) Volf, Tayler Tracy, Amylea and Ezmeralda Porter; her dad, Gary (Nancy) Espinoza of Milford, Iowa and her mother, Judy Allen of Fort Dodge; her four siblings, Tami Neavin and Tim Espinoza both of Spirit Lake, Teresa Trueblood of Fort Dodge and Debbie Allen of Des Moines. She was preceded in death by her step-dad, grandparents and her nephew. In lieu of flowers, memorial may be left to the direction of the family.

The family of Veronica "Taco" Weiss created this Life Tributes page to make it easy to share your memories.

Send flowers to the Weiss family.