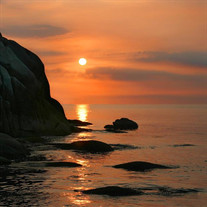 Vilda J. Thurston Peterson, 96, of Pioneer, died Wednesday, June 12, 2019, at the Humboldt South Care Center. A service honoring Vilda’s life will be 10:00 a.m. Saturday, June 15, at the Gunderson Funeral Chapel. Interment will follow in Otho Cemetery. Visitation is 5:00 to 7:00 p.m. Friday at Gunderson Funeral Home & Cremation Services. Memorials may be directed to the discretion of the family. Vilda is survived by her children, Julia (Jerry) LeBaume, Gary (Sandra) Thurston, Fran Stauffer and Kenneth (Jennifer) Thurston; numerous grandchildren, great grandchildren and great-great grandchildren. She was preceded in death by her two husbands, her parents, four children, Vilda Thurston, Jim Thurston, Dan Thurston and Sandra Vanderhoff, four grandchildren, Jerry, Josh, Page and Larry, and four sisters. Vilda Josephine Thompson, the daughter of Elmer and Osca (Swanson) Thompson, was born April 26, 1923, at Brainerd, Minn. She moved to the Fort Dodge area at a young age and attended Clayworks School. In 1939, Vilda was united in marriage to James A. Thurston at Fort Dodge. He preceded her in death in 1965. She later married James R. Peterson. Vilda was formerly employed at Mercy Hospital and Budget Inn, and she was also a homemaker. Vilda enjoyed gardening and flowers, nature and traveling. She was a member of the American Legion Auxiliary at Gilmore City and the United Methodist Church in Gilmore City. Vilda was a resident of Pioneer for 65 years before moving into Humboldt.

The family of Vilda Josephine Thurston Peterson created this Life Tributes page to make it easy to share your memories.

Send flowers to the Peterson family.