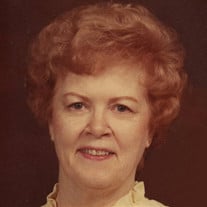 Vivian Hutchinson, 97, of Fort Dodge, died Thursday, February 21, 2019, at the Simpson Health Center of Friendship Haven. Celebration of Life will be held on Thursday, February 28, 2019 at 11:00 a.m. at the Tompkins Celebration Center, Friendship Haven. Visitation will be held from 10:00-11:00 a.m. at the Tompkins Celebration Center. Interment will take place at North Lawn Cemetery. Vivian is survived by her daughter Carol (Richard) Clark, Cedar Falls; son-in-law Jack Murphy, Apple Valley, Minn.; grandchildren, Michael, Chris, Patrick, Abby, Dick Jr., Kevin, Christine, and Kathy; 19 great grandchildren; and four great-great grandchildren. She was preceded in death by her parents, her husband Charles, her son Michael, her daughter Linda Murphy; her brothers, Richard, Raymond, Eugene, and Robert Olson; her sister, Ila “Lou” Greer, and her great-grandson, Kevin Jr.. Vivian Jenny Olson, the daughter of Axel and Ebba (Anderson) Olson, was born April 23, 1921, in Boone County. She graduated from Dayton H.S. in 1939. She was united in marriage to Charles E. Hutchinson on March 3, 1940. Vivian worked at Sherrson’s in Fort Dodge for 30 years. She loved to help people and volunteer including reading to the blind through Iris. In 2000 Vivian received the “Volunteer of the Year” award from Governor Tom Vilsack. She was also a charter member of Lodge 526 of the Son’s of Norway, as she was very interested in her Norwegian Heritage. Vivian was also a 50+ year member of the Order of the Eastern Star. She was loved and will be greatly missed by all who knew her. In Lieu of flowers please leave a memorial in memory of Vivian to the Good Samaritan Fund at Friendship Haven or to UnityPoint Hospice.

The family of Vivian Hutchinson created this Life Tributes page to make it easy to share your memories.

Send flowers to the Hutchinson family.