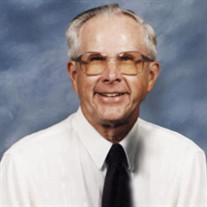 Walter Licht, 91, of Badger died Sunday, March 27, 2022, at Trinity Regional Medical Center. A service will be held at 10:30 a.m. Friday, April 1, 2022, at Good Shepherd Lutheran Church. Visitation will be 5-7 p.m. Thursday, March 31 at Good Shepherd. Interment will take place at North Lawn Cemetery. Arrangements have been entrusted to Gunderson Funeral Home and Cremation Services. Walter Henry Licht was born on June 16, 1930, in rural Webster County, to Albert and Agnes (Kirchhof) Licht. He graduated from Fort Dodge High School in 1948. Walter was united in marriage to Geraldine Voigt on June 16, 1957, at Trinity Lutheran Church in Algona, IA. He farmed in Webster County until December 1968. Worked at W&H Coop for 3 years and with Farm Bureau Insurance until retirement in 1996. He was very active in the Farm Bureau organization (38 years) and church leadership. He faithfully served as an elder and church president for many terms, and as the mayor of Badger, IA for 12 years. Walter also served the Iowa District West of The Lutheran Church - Missouri Synod as Board Chairman for 6 years. Walter is survived by his wife, Geraldine; children Russell (Jo Anne) Licht, Gary (Linda) Licht, Nathan (Shelley) Licht, and Brian (Lynette) Licht; 9 grandchildren and 10 great-grandchildren. He was preceded in death by his parents Albert and Agnes; and his siblings, Irene, Edgar, Marjorie, Elberta, and Ruth. In lieu of flowers, memorials may be directed to the Lutherans For Life.

The family of Walter Henry Licht created this Life Tributes page to make it easy to share your memories.

Send flowers to the Licht family.