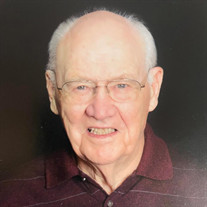 Willard G. Lundberg, 93, formerly of Burnside, died November 12, 2021 at the Simpson Health Center of Friendship Haven. Funeral service will be held 10:30 a.m. Monday, November 15, 2021 at the Celebration Center at Friendship Haven. Interment and military honors will be held in West Lawn Cemetery at Lehigh. Visitation will be held from 5:00 – 7:00 p.m. Sunday, November 14 at Gunderson Funeral Home & Cremation Services. Willard is survived by his children, David (Carole) Lundberg, of Colorado, and children Ali and Tristan; Beth Lundberg, of Fort Dodge, and her children Brynson, Holly and Paige; his daughter-in-law Jane Lundberg, of Fort Dodge; and her children Matthew, Andrew and Michael; his great-grandchildren, Christian, Kadyn, Riley, Mason, Emmalyn, Samantha and Connor; his sister Mavis Anderson of Arkansas, and special friend Mary Lou Nimrod. He was preceded in death by his wife of 66 years, Maxine in 2016, his parents, son Jon Lundberg, his siblings Calvin, Marcia and Wallace. Willard Glenn Lundberg, the son of Walter and Elsie (High) Lundberg, was born January 30, 1928, in Bertrand, NE. He graduated from Pilot Mound High School in 1945. On July 8, 1950, Willard was united in marriage to Maxine Peterson at St. Olaf Lutheran Church in Fort Dodge. Willard was drafted into the Army in 1954, during the Korean War, and was discharged in 1956. He was employed at Hormel’s from 1950 until its closing, retiring in 1983. Willard was proud to be a farmer, raised on the farm and farmed himself from 1962-1982. He enjoyed times spent with family, especially with his grandchildren. Fishing and woodworking were his favorite pastimes. He was a member of Burnside Immanuel Lutheran. Willard cherished his memorable trip on the Honor Flight to D.C. Memorials may be directed to the Brushy Creek Honor Flight or to Friendship Haven.

The family of Willard Lundberg created this Life Tributes page to make it easy to share your memories.

Send flowers to the Lundberg family.