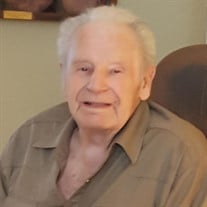 Bill Luckenbill, 90, loving father and grandfather passed away after a brief illness on Wednesday, December 23, 2020. Bill was born on March 13, 1930 to Tillman and Della Luckenbill in Fort Dodge, IA. He attended Fort Dodge schools until he joined the Army in 1947. He served in Austria as Sergeant of the Guard running a border patrol at the tender at of 16. When he returned home from the service he met and married the love of his life, Leona June Lewis. The couple made their home in Fort Dodge where they raised 5 daughters. Bill was employed at Hormel’s for 33 years. He was warm, loving, sensitive and gentle man. He had a strong faith and shared the love of Jesus with everyone whenever he had the chance. He enjoyed boxing as a young man and watching football and baseball. He was a self-taught handy man and shared his skills with anyone who needed his help. He loved listening to music especially Judy Collins, Johnny Cash and Johnny Horton. Bill was preceded in death by his parents, several siblings, an infant son Michael Dean, grandson Bruce James, daughter Shirley June and his beloved wife June. He is survived by his four daughters, Beverly Jean Mentzer of Otho, Deborah Jane Remsburg of Otho, Sandra Louise VandenHaak (Jobert) of Kansas City, Kansas, and Brenda Lee Bouma of Fort Dodge. He has 14 granchildren; Dave Urelius Jr., Robin Graves, Jeremy Urelius, Mike Maguire, Stacey Moore, Chris Pyse, Bill Myers, Dustin Myers, Laura Myers, Matthew VanGundy, Brooke Nash, Abby VandenHaak, Amy Segreto and Katherine Hayes. He has 33 great grandchildren and 8 great great grandchildren and several nieces and nephews, 2 brothers Richard Luckenbill of Des Moines and Charles Luckenbill of Fort Dodge. He will be sorely missed by all who knew him. A remembrance service will be held on Tuesday, December 29 at 1:30 p.m. with visitation one hour prior at 12:30 p.m. at Gunderson Funeral Home, Fort Dodge.

Bill Luckenbill, 90, loving father and grandfather passed away after a brief illness on Wednesday, December 23, 2020. Bill was born on March 13, 1930 to Tillman and Della Luckenbill in Fort Dodge, IA. He attended Fort Dodge schools until he... View Obituary & Service Information

The family of William Dean Luckenbill created this Life Tributes page to make it easy to share your memories.

Send flowers to the Luckenbill family.