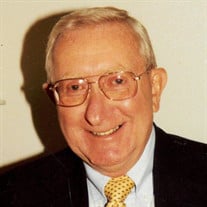 William “Bill” H. Nelson, 95, of Marion, Iowa, passed away peacefully on Thursday, August 27, 2020, at Dennis & Donna Oldorf Hospice House of Mercy in Hiawatha, Iowa. Graveside services will be held at 2 p.m. on Tuesday, September 1, 2020, at Otho Township Cemetery in rural Otho, Iowa, with full military honors accorded by the US Navy Honors Detail. Public Visitation will be held from 12:30 – 1:30 p.m. Tuesday, at Gunderson Funeral Home in Fort Dodge, Iowa. All guests are respectfully requested to wear a face mask and practice social distancing. Arrangements by Murdoch Funeral Home & Cremation Service, Marion. Bill was born April 16, 1925, in Fort Dodge, Iowa. He served in the United States Navy during World War II and was present during the Okinawa Invasion on Easter Sunday, 1945. On July 6, 1947, in Otho, Iowa, he was united in marriage to Dorothy Laird. Bill was a photographer for Don Peterson Photo in Fort Dodge before moving to Marion and being a photographer for Rockwell-Collins from 1960 until retiring in 1986. He served on the first town council of Otho from 1947 - 1959 and on the Park Board in Marion from 1973 – 1988, where he was chairman during the relocation and building of the new swimming pool. Bill was a member of First United Methodist Church in Marion. He is survived by his daughter, Carol (Roger) Harms of Titonka, Iowa; son, Kim (Debi) Nelson of Marion; two grandsons, Cory (Erica) of Omaha, Nebraska and Preston of Nashua; one great-granddaughter, Allegra; and 1 half-sister, Mary Jean (Louis) Andrews of Fort Dodge, Iowa. Bill was preceded in death by his parents; wife, Dorothy Nelson in 2015; and half-brother, John Peterson. In lieu of flowers, memorials in Bill’s memory may be directed to the Marion Parks and Recreation Department at 4500 10th Street in Marion, Iowa, 52302. The family is appreciative of the generous care provided by Deb Nelson, Dr. Melanie Stahlberg, and the staffs of Summit Pointe and Mercy Hospice House. Please share a memory of William at www.murdochfuneralhome.com under obituaries.

The family of William "Bill" Nelson created this Life Tributes page to make it easy to share your memories.

Send flowers to the Nelson family.