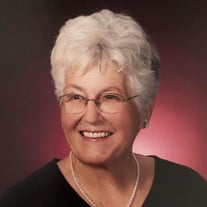 Winona Irene Swegle was born 15 January 1927 in Liberty township, Clarke, Co., Iowa to Jay J. and M. Rosamond (Cowles) Swegle. Her siblings called her Nona, and everyone else called her Winnie. She grew up on her parents’ farm as a real farm girl and going to the Liberty Country School down the road. When it came time for junior and senior high school, her father and the neighbors got a school bus that took the Liberty kids to Indianola and Winona graduated from Indianola High School at just 16 years old. She went to Des Moines where she worked as a secretary for a meat packing company and rented a room in Miss Doty’s boarding house. A young ex-airman named Vern L. Peters moved into the boarding house. The rest is history. The met, snuck out to date (against the boarding house rules), and a few months later, 24 July 1948 they were married at Capital City Christian Church in Des Moines. Winona and Vern moved to Fort Dodge for a few years where they had the first two of their six children. When the Korean Conflict broke out, Vern enlisted in the U.S. Air Force and the young family started a life of adventure moving from place to place as the Air Force sent them. Winona became a military wife, often left to run a household, handle the finances and care for her children alone while Vern was on a tour of duty overseas. Over the years they lived in Louisiana, Tennessee, Utah, California, Iowa, Florida, the Philippines, Washington state, and Illinois. When Vern retired, they moved back to Fort Dodge, Iowa and Vern took a job as manager of the airport. Winona worked for a time as a podiatrist assistant after the children were all out of the home. She led an active life. She played bridge for years with other Air Force wives. She taught Sunday school classes, learned to swim, and golf. She and Vern played in the Lakeside Couples golf league. After they retired, they started spending winters in Mesa, Arizona where she taught water exercise classes at the senior park where they lived. She took water-color classes and painted. She volunteered in various capacities for the park church. In the summer they boated in Iowa, went antiquing with friends, and spent as much time as possible with the children, grandchildren, and other family members. Vern died 11 September 2005. Winona had cared for him all during his illness. Eventually she met a new friend Clarence Hammann, and they partnered up for almost fourteen years, still spending summers in Iowa and winters in Arizona, until recently when her health necessitated her move to a care facility in Washington, Iowa, and where she passed away peacefully 13 September 2021. She was preceded in death by her husband Vern, her parents, her brother Wayne E. Swegle, and a daughter-in-law Bev Peters. She leaves six children: Diane (Ed) Shough of Osceola, Iowa; Dan Peters of Lisle, Illinois; Dave (Ann) Peters of St. Paul, Minnesota and Tucson, Arizona; Don (Barb) Peters of Washington, Iowa; Doug (fiancé Mariela) Peters of Melbourne, Florida; and Rick (Candace) Peters of Riverside, Iowa. Her eight grandchildren are: Eric Shough, Leslie Peters, Amy Beckman, Becky Peters, Katie Peters, Dan Peters, Sarah Peters, and Ben Peters. There are also six great grandchildren: Willow, Luna and Benson Peters and Sophie, Jason, and Jackson Beckman. Also surviving are sister Mary Evelyn Osenbaugh of Maineville, Ohio; brother Alan J. (Mary) Swegle of Cedar Rapids, Iowa; her friend Clarence Hamman of Wilton, Iowa; as well as many other relatives and friends. Visitation will be held 1:00 p.m. Thursday, September 16, 2021, at Gunderson Funeral Home & Cremation Services. Graveside service will follow at 2:30 p.m. Thursday at North Lawn Cemetery, Fort Dodge, Iowa.

Winona Irene Swegle was born 15 January 1927 in Liberty township, Clarke, Co., Iowa to Jay J. and M. Rosamond (Cowles) Swegle. Her siblings called her Nona, and everyone else called her Winnie. She grew up on her parents&#8217; farm as a real... View Obituary & Service Information

The family of Winona Peters created this Life Tributes page to make it easy to share your memories.

Send flowers to the Peters family.