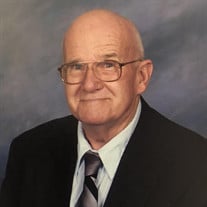 Adrian LaVern Sanford, 90, was called to his Heavenly Home on Tuesday, October 27, 2020 at the Fort Dodge Health and Rehabilitation where he was a resident since November of 2018. He was the only son born to Amos and Ruby (Skow) Sanford at the Orchard Glen Dairy home on January 17, 1930. He attended Fort Dodge Community schools and graduate in 1948. He married his “one and only sweetheart”, Mary Louise Scharf on June 4, 1950 at St. Paul Lutheran Church. God blessed their union with nine children; James in Fort Dodge, Jon (Tamy) in Seneca, SC, Joel (Nelly) in Fort Collins, CO, Jeffry (Wanda) in Manson, Jay (Shelley) in Branson, MO, Julianne in Fort Dodge, Jerome (Mimi) in Des Moines, Jill in Fort Dodge and Jane in Elizabethtown, KY. His family continued to grow. He now has 23 grandchildren and 22 great grandchildren. He is also survived by his brother-in-law Allan (Sandie) Scharf of Arvada, CO, nephew Paul and niece Pam. Adrian worked as a young boy at his parents’ dairy and farm. Later he worked at Obergs Dairy, Tobins Meat Packing Plant and USG Gypsum. He was a letter carrier for the US Postal Service from 1957 until his retirement in 1989. After walking 11 miles a day on his route he would report for his second job as a custodian at St. Paul Lutheran Church and School retiring from that position in 1994. He also managed and maintained the 8 apartments that his parents owned in town. Adrian served on many boards at St. Paul Lutheran. He was on the Board of Church Properties, Board of Education President, and the Organ Building committee. He was a member of Retired Carriers of the US Postal Service NALC. With so many jobs and so many children, he had no free time whatsoever for hobbies but sure enjoyed and appreciated antique classic cars. His huge stacks of old car magazines will attest to that. He was preceded in death by his parents and infant great granddaughter Madison Irving. His wife of 62 years, Mary Louise passed away October 30, 2012. Adrian will be missed by so many who knew and loved him. He was an obedient son, and a faithful and loving husband. As a hardworking, caring father, he didn’t lecture but taught his children by his example putting his faith into actions by his work ethic, humility and Christian generosity. On Saturday there will be a celebration of his life in a private service for the family. Memorials can be made in lieu of flowers to the St. Paul Lutheran School.

Adrian LaVern Sanford, 90, was called to his Heavenly Home on Tuesday, October 27, 2020 at the Fort Dodge Health and Rehabilitation where he was a resident since November of 2018. He was the only son born to Amos and Ruby (Skow) Sanford at... View Obituary & Service Information

The family of Adrian Sanford created this Life Tributes page to make it easy to share your memories.

Adrian LaVern Sanford, 90, was called to his Heavenly Home on...

Send flowers to the Sanford family.