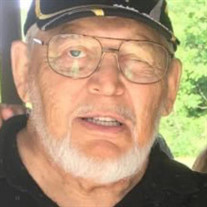 Arthur Lavern Klein Jr., 73, of Rinard, surrounded by his loving family, went to be with his Lord on Saturday, April 10, 2021, at Fonda Specialty Care in Fonda, Iowa. Services will be 11:00 a.m. on Saturday, April 17, 2021, at the Gunderson Funeral Chapel with full military honors conducted by the Iowa Army National Guard and the VFW Post #1856. Visitation will be held from 9:00 a.m. to 11:00 a.m. on Saturday at the Gunderson Funeral Home & Cremation Services in Fort Dodge. Arthur Lavern Klein Jr., the son of Arthur and Catherine (Lynch) Klein Sr. was born on May 16,1947, in Fort Dodge. He attended Fort Dodge Senior High and at the age of 17 enlisted into the United States Army. He served in the Vietnam War for two years and received a purple heart and several other medals. He was honorably discharged on January 14,1966 with a full disability. Arthur was united in marriage to Janet Knapp on November 17, 1978 in Fort Dodge. After their marriage, the couple made their home in Rinard. Art worked as a carpenter, roofer, handyman, and was a Jack of all trade’s kind of guy. He worked for Ulstad Construction, Isaacson Roofing and any other project he could find around the house. Art loved the outdoors. A big part of his life was spent hunting and fishing. He also played in his father’s traveling band, Art Klein Combo Band. Art was a champion pool player. Every year he would play in pool tournaments and he even played twice at the World Pool Championships in Las Vegas. Art played for the Green Amusement Company of Fort Dodge. He is survived by his four daughters, Kathryn (Shannon) Kozal and Jolene (Mike) Wickersheim both of Rockwell City, Evelyn (Aren) Andreoli of Shakopee, Minnesota and Karrie Llewellyn of Green, Iowa; stepson Wade Knapp of Farnhamville; grandchildren, Amanda, Katlyn, Nicholas, Erica, Cassandra, Jessica, Alexus, Whitney, Kaiden, Brennen, Dallas, Drew, Bria, Isaiah, Ashley and Shelbey, 24 great-grandchildren and numerous nieces and nephews, his four brothers Terry Klein, Mark (Sally) Klein, Matthew (Diane) Klein and Kevin (Terry) Klein; a close niece Jennifer Knapp and a special cousin Bobby Klein, who he enjoyed spending time with. He is preceded in death by his wife Janet, who passed away on Jan 9, 2015, his parents Arthur & Catherine Klein Sr., maternal and paternal grandparents, and a sister-in-law Vicki Klein.

The family of Arthur Lavern Klein Jr. created this Life Tributes page to make it easy to share your memories.

Arthur Lavern Klein Jr., 73, of Rinard, surrounded by his loving...

Send flowers to the Klein family.