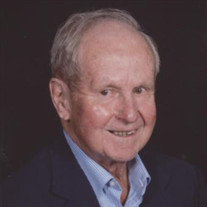 Bennett A. Johnson, 95, of Fort Dodge, died Saturday, April 16, 2022 at the Simpson Health Center of Friendship Haven. Visitation will be held 5:00 – 7:00 p.m. Tuesday, April 19, 2022 at Gunderson Funeral Home and Cremation Services. The Mass of Christian Burial will be held at 11:00 a.m. Wednesday at Holy Trinity Catholic Church. Interment and military honors will be held 11:00 a.m. Thursday at Ascension Cemetery in Libertyville, IL. Bennett Alfred Johnson, son of Alfred and Julia (Snyder), was born August 13, 1926, in Park Ridge, IL. He served in the Army Air Corps from 1945 – 1946 in the European Theater. He graduated from Loyola University in 1951. Bennett was united in marriage to Gertrude Hageman in 1957. They lived in north suburban Chicago until 1968 when he became employed by John Morrell in Iowa until his retirement in in 1988. He was controller of Humboldt Sausage in Humboldt, Iowa. Survivors include his children Larry (Brenda) Johnson of Littleton, CO, Julia Schaefer of Iowa City, Susan (Michael) Beller of Spokane, WA and Jennifer Johnson of Highlands Ranch, CO; 6 grandchildren, Kaitlin, Nick, Sarah, Chase, Courtney, and Rachel. In 2011, he was preceded in death by Gertrude, his wife of 54 years. He was also preceded in death by his parents and grandson Blake. Memorials may be directed towards Canine Companions for Independence, Veterans Initiative. https://p2p.onecause.com/tributegift/donate

The family of Bennett A. Johnson created this Life Tributes page to make it easy to share your memories.