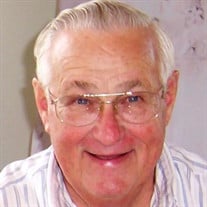 “Bob” Robert J. Stark, 86, passed away on Monday January 11th in Fort Dodge, Iowa. He left this world on the same day his mother passed - 67 years ago when Bob was just 19 years old. Bob was born on April 8th, 1934 in Boone, IA to Oscar Stark and Esther (Johnson) Stark. He grew up attending Dayton’s Methodist Church and it’s public schools where he was active in Basketball, Baseball, Choir, Instrumental Music, Plays and graduated in 1952. In 1955, he married Donna Sundell in Boxholm, Iowa. Soon after, Bob joined the US Air Force reserve and was deployed to the 388th Fighter Bomber Wing Squadron in Etain, France to serve during the Korean War. Donna joined Bob on the base and their first daughter Teri was born in Chambley, France. The family settled in Fort Dodge in 1962 where Bob worked as both a projectionist at the Drive-In Theatre and the office manager for Lazy Ike before launching his own successful business called Stark Stormor Sales which sold Grain Bins, Farm Equipment and Wick Buildings for over 40 years. Bob was always the life of the party where he loved to bowl, roller-skate, dance, play the organ and “play” the spoons. He was always one to tell a joke, loved to raise horses, fish and he loved collecting everything. A recent high for Bob was his Brushy Creek Area Honor Flight where he and fellow veterans flew to tour Washington DC in tribute to their service. Bob is preceded in death by his parents; two step brothers; a daughter-in-law; 6 brothers/sisters-in-law; and his beloved wife of 61 years. He is survived by his sister Peggy; sister-in-law Janene; his three children: Teri (Dave) Jackson, Steven, & Linda (Mike) Murphy; 7 grandchildren: Brandon (Amy) Townsend & Blake Townsend (Becca), Callie & Cady Stark, Nick, Brock & Maddox Murphy; and 2 great-grandchildren: Terence & Ashley Kiley. A private graveside service will take place with Bob being interred next to Donna at the North Lawn Cemetery in Fort Dodge. In light of the challenges of gathering today, a celebration of Bob’s life will be held on a summer date to be announced in the coming months. Arrangements have been entrusted to Gunderson Funeral Home & Cremation Services. In lieu of flowers, condolences or memorials can be made in Bob’s honor to the Webster County 4H organization or Grace Lutheran Church and can be sent in care of his family to: Bob Stark PO Box 814 Fort Dodge, IA 50501. The family would love to hear your great stories of Bob.

The family of Bob J. Stark created this Life Tributes page to make it easy to share your memories.

Send flowers to the Stark family.