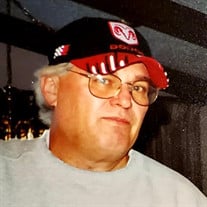 Douglas Hager, 71, of Spirit Lake, IA formerly of Fort Dodge, passed away on Wednesday, December 9, 2020, at his home in Spirit Lake. Services will be 11:00 AM on Thursday, December 17, 2020, at the Gunderson Funeral Chapel in Fort Dodge. Burial will be in the North Lawn Cemetery in Fort Dodge. Doug is survived by his two children: Chris (Susie) Hager, Millersburg OH and Jeanel (Rob) Hibbison, Easley, SC, six grandchildren: Blaine Hager and Macin Hager, Millersburg OH; Alicia (Zach) Hagstrom, Brandon, SD; Ashley (Matt) Blakemore, Olympia, WA; Amber (Jesse) Hasvold, Colton, SD; Andrew Hibbison, Harrisburg, SD, four great-grandchildren, and his brother: Mike Hager, Spirit Lake, IA. He is preceded in death by his parents. Douglas Eugene Hager, the son of Eugene and Geraldine (McGinnis) Hager, was April, 4, 1949 in Fort Dodge. In May of 1967, he graduated from Fort Dodge Senior High School. In October of 1968, Doug married Mary Ann Gribbin. He lived in Madison, SD where he attended Dakota State College. Doug worked with his father at Hager Construction for many years. Later, Doug worked in many bars and restaurants in Fort Dodge for many years before moving to Lake Okoboji full time. Doug loved playing golf along with watching football and NASCAR. Doug’s love for football began in his school years where he was an all-star player for Fort Dodge High School Dodgers. Doug and his brother, Mike were members of a variety golf courses around Lake Okoboji through the years. When he wasn’t helping Mike mow lawns or doing odd jobs fixing up lake homes, you could find Doug golfing. Doug even tried teaching his son-in-law, Rob how to golf but after one outing where Rob almost took out a windshield on a car driving by, Doug threw in the towel and said maybe it was best if Rob was just a spectator. Doug loved taking a trip every year to Florida to play golf with his brother, Mike and son, Chris along with other friends which included playing golf every day and then attending the final NASCAR race of the year. He enjoyed watching his daughter’s children grow up by spending summer weekends at Lake Okoboji with him where his grandchildren loved stealing the golf cart from him, counting the hundred-dollar ($100) bills in his wallet and going out on the boat to do some water skiing or tubing. Doug had a passion for cooking. He enjoyed watching cooking shows. He tried new recipes all the time and loved sharing the good ones with his daughter. For a Christmas present, his daughter gave him a Samsung tablet and showed him how to save recipes, load apps and generally join the digital world. He enjoyed playing casino and card games on it and surfing the web. In lieu of flowers, please make a donation to the golf teams of Fort Dodge Senior High School, 819 North 25th Street, Fort Dodge, IA 50501.

Douglas Hager, 71, of Spirit Lake, IA formerly of Fort Dodge, passed away on Wednesday, December 9, 2020, at his home in Spirit Lake. Services will be 11:00 AM on Thursday, December 17, 2020, at the Gunderson Funeral Chapel in Fort Dodge. Burial... View Obituary & Service Information

The family of Douglas Eugene Hager created this Life Tributes page to make it easy to share your memories.

Send flowers to the Hager family.