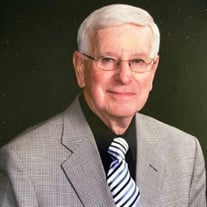 James S. ‘Jim’ Harris, 87, of Blaine, Minnesota, formerly of Fort Dodge, died Sunday, May 24, 2020, at White Pine Assisted Living in Blaine. Visitation will be from 10:00 AM to 11:00 AM on Saturday, May 30th at Gunderson Funeral Chapel in Fort Dodge, Iowa, with memorial service honoring Jim’s life immediately following at 11:00 AM also at Gunderson Chapel - Pastor Doug Wolter of Humboldt, Iowa officiating. Interment will then follow at Lowell Cemetery near Clarksville, Iowa. James is survived by his daughters, Sheryl (Phil) Reed of Fort Dodge; Brenda (Rick) Glasow of Blaine, Minnesota; six grandchildren, ten great grandchildren, as well as his brother Ward Harris Jr. He was preceded in death by his parents, his brother Bernard ‘Bud’ Harris, and sister Ladyne Schellhase. James S. Harris, the son of Ward and Hilda (Powell) Harris, was born January 6, 1933, in Shell Rock, Iowa. He graduated from Shell Rock High School in 1951. James served in the United States Navy during the Korean War. On October 1, 1954, James was united in marriage to Norma Lee Anderson. He was employed with Schield Bantam of Waverly, Iowa for 35 years before retiring; he then came out of retirement and worked at Hobson Mould Works (Shell Rock, Iowa) for several years before retiring definitively. In 2003, Jim and Norma moved to Fort Dodge to be near family, and enjoyed great fellowship at their church in Humboldt and spent many hours enjoying their great-grandchildren. Family requests that memorial gifts be directed to Bethel University, 3900 Bethel Drive, St Paul, MN 55112. Lowell Cemetery is located southeast of Clarksville. It may be found by traveling either from the west or east on Iowa Highway 3 and then by turning north on Union Avenue. Travel north past 205th St. (on the right). The road automatically changes to Timber Road and will curve to the west for a short distance and then back to the north for a short distance at which time the cemetery will appear at the next curve. Please refer to your map application if available. Interment services will begin at 2:30 p.m.

The family of James S. 'Jim' Harris created this Life Tributes page to make it easy to share your memories.

Send flowers to the Harris family.