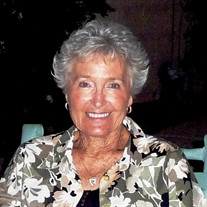 Jane Thorson, 86, of Fort Dodge, passed away Tuesday, October 15, 2019, at the Paula J. Baber Hospice Home, in Fort Dodge. A Celebration of Life will be held at 4 p.m. on Saturday, October 19, at the Gunderson Funeral Home & Cremation Services in Fort Dodge. Visitation will be from 3 p.m. until the time of the service on Saturday. Jane Adel Holt was born March 7, 1933, in Fort Dodge; the daughter of Melvin and Ethel Holt. She graduated from Fort Dodge High School in 1951, attended Fort Dodge Junior College and married Russell Thorson the same year. They raised their three children in Fort Dodge before moving to Mesa, Arizona where they retired. Russell passed away in 2010. Jane moved back to Fort Dodge in March of 2019. Jane is survived by son Eric (Wanda) Thorson, of Jefferson City, Tennessee, and daughters Jody Castor and Rachel (Marty) Eger, both of Fort Dodge. She has 10 grandchildren: Dan Gilbert, Andrew Gilbert, Becca Gilbert, Rachel Castor, Jenny Eger, Brittany Eger, Josh Eger, all of Fort Dodge; Val (Brian) Hill, of Algona; Kim Rundles and Chris (Kristen) Thorson, of Tennessee. She also has 5 great grandchildren: Ryker and Olivia Rundles, Raegan and Madison Hill, and Jace Kimmerling. She was preceded in death by her parents, sisters Beryl Gilbert and Norma Ramsden, brother John Holt, and husband Russell. Jane loved music. She had natural talent and a beautiful singing voice. In her school days, she was a regularly featured vocalist in musical productions. She played cello in the All-State Music Festival and was a drum majorette in the High School Marching Band. At age 17, she began her professional singing career as soloist for the Jimmy Kraft Band, a local dance band of the 1940s in which her future husband was the lead trumpet player. Unbeknownst to Jane, some friends submitted her photograph for the Miss Fort Dodge beauty pageant, which was the first rung of the Miss America pageant. In 1951, Jane became Fort Dodge’s very first Miss Fort Dodge. She went on to win second runner up to Miss Iowa. When her children were young, Jane was active in music activities within the Fort Dodge community. She sang in the Fort Dodge Glee Club, and along with husband Russell, sang in the choir at St. Olaf Lutheran Church and played in the Fort Dodge Symphony. Later, Jane and Russell formed their own band, “JANE RUSSELL”, which became very successful for Jane and Russell. All their children performed in the family band. They played at ballrooms, clubs, weddings, and anniversaries for 25 years throughout Iowa. In their late 40s Jane and Russ became snowbirds to Mesa, Arizona, playing for dances on weekends and eventually retiring there. Jane enjoyed almost 40 years in Arizona with a rich social life that included tennis, golf, water aerobics, theater, concerts, traveling and dancing. She played bridge regularly and was a duplicate bridge Life Master. Jane loved her retirement years in Mesa and will be dearly missed by dozens of close friends.

Jane Thorson, 86, of Fort Dodge, passed away Tuesday, October 15, 2019, at the Paula J. Baber Hospice Home, in Fort Dodge. A Celebration of Life will be held at 4 p.m. on Saturday, October 19, at the Gunderson Funeral Home & Cremation Services... View Obituary & Service Information

The family of Jane Thorson created this Life Tributes page to make it easy to share your memories.

Send flowers to the Thorson family.