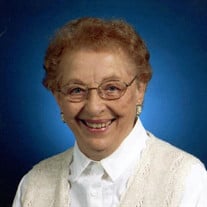 Jeane White Burke, 90, passed away on February 25, 2019, at Paula J. Baber Hospice Home, Fort Dodge, IA. A celebration of her life will be held on Saturday, March 2, 2019 at the First United Methodist Church in Fort Dodge. Visitation will begin at 10:00 followed by the service at 11:00. Arrangements have been made with Gunderson Funeral Home and Cremation Services with burial in Rush Lake Cemetery west of Mallard, IA. Jeane is survived by her husband, Clifford, and her children: Charlene (Rod) Giles of Tulsa, OK, Joe (Jamie) Burke of Parsons, KS and David (Donna) Burke of Gassville, AR. She is also survived by ten grandchildren: Justin (Abbie Brown) Giles, Megan (Gary) Bennett, Austin Giles, Allison (Travis) King, Aaron (Lauren) Burke, Andrew (Melissa) Burke, Sarah (Johnny) Potter, Elijah (Crystal) Burke, Ethan Burke and Obadiah Burke. Her six great grandchildren include: Benjamin Giles, Linnea King, Elianah King, Molly Burke, Wyatt Burke, Elaina Burke and Tyler Potter. Those preceding her in death were her parents Henry and Viola White and sisters Agatha Hines of Mason City, IA, Leona Henderson of Plover, IA, and twin sister Jeanette Schlutz of Mason City. Jeane graduated from Mallard High School in 1947 and attended the Hamilton Business College in Mason City where she met Clifford, her future husband and the love of her life. She worked at Mason City Warehouse and Carroll Sales, then as assistant treasurer for Farmers Hybrids in Hampton. Later she served as State Clerk for the Iowa Department of Soil Conservation Service Fort Dodge office for fifteen years before retiring in 1988. Jeane and Clifford were married May 14, 1950 in the Little Brown Church at Nashua, IA. After living in Hampton and Des Moines, for short times, they settled in Fort Dodge where they became active members of First United Methodist Church. Jeane volunteered in many ways there for over 60 years. She sang in the choir over 45 years, taught third grade Sunday School ten years and served in many additional capacities. Jeane believed that God’s purpose for her life was to love and help others. Friends and strangers alike were blessed by her enthusiastic smiles and childlike joy of life. So many things brought her joy: playing piano, singing, golfing, fishing, photography, playing cards with friends and gardening. Some of her favorite times were spent swinging in her lawn swing enjoying her beautiful flowers and listening to the various birds singing. She loved sharing her roses with others. But of all her joys, being with family brought her the most happiness. She especially loved having them home for the holidays and sharing her cooking with them. Nobody makes better cinnamon rolls, apple pie or chocolate chip cookies! She will be greatly missed by her family and friends. Memorials may be left to the discretion of the family.

Jeane White Burke, 90, passed away on February 25, 2019, at Paula J. Baber Hospice Home, Fort Dodge, IA. A celebration of her life will be held on Saturday, March 2, 2019 at the First United Methodist Church in Fort Dodge. Visitation will begin... View Obituary & Service Information

The family of Jeane White Burke created this Life Tributes page to make it easy to share your memories.

Send flowers to the Burke family.